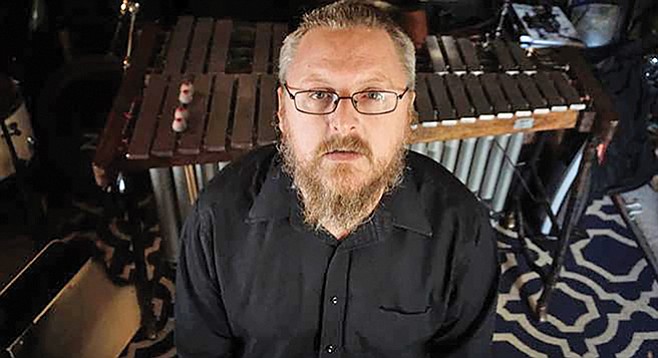 "I like the steady work, but I also love creating my own music and running my own bands.”

Drummer/composer Nathan Hubbard won the San Diego Music Award for “Best Jazz Album,” in 2014, for Encinitas and Everything, and again in 2017 for Furiously Dreaming, a project featuring his Skeleton Key Orchestra.

Has the recognition led to more work?

“Honestly I don’t know,” mused Hubbard. “It’s given me a higher profile, and I’m glad it happened, but it’s really hard to say whether I’ve gotten more gigs out of it. I think, generally, as a musician, it’s hard to get taken seriously — so all of these things — the awards, the articles, the reviews, lend credence to the notion that I’m doing serious work.”

Hubbard believes in the value of being a “working musician,” and even if opportunities for his more creative projects come few and far between, he manages to stay busy, often through multi-run engagements playing in local pit bands.

“I usually do about two or three musical theater shows every year since the 2000’s,” Hubbard said. “This year it was Spamalot at the Cygnet for 7 weeks and I’m just finishing up a five-week run of Fun Home at the San Diego Rep.”

Hubbard enjoys the variety, even though it can be a struggle to schedule gigs playing original music under such circumstances.

“Lately, I’ve been able to squeeze a few hits with Parker Meridien [Hubbard’s hip-hop trio with emcee Jack King and bassist John Rieder] on my dinner break from the show, then run back downtown, try to find parking, and play another show.”

Sometimes staying busy comes at a cost. “Last year, I went three months with only one day off, that’s when we did the album release concert with [multi-woodwind virtuoso] Vinny Golia at Bread & Salt. But I always try to make use of the time when I’m not able to play my own music — I do a lot of writing, for instance. I kind of like juggling both things — I like the steady work, but I also love creating my own music and running my own bands.”

What’s next? “Parker Meridien has a new EP coming out [October 5]," he says of the group nominated for Album of the Year and Artist of the Year at the 2018 San Diego Music Awards. "We’re usually an electric club type band, but this new music is a combination of acoustic music and poetry where we add the cello of Sharon Taylor.”