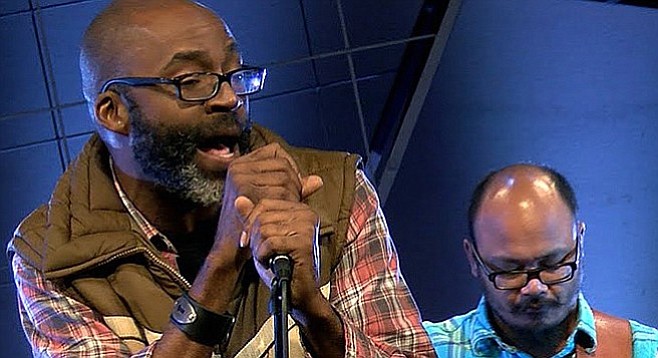 Jack King, aka Parker Edison, came to local notice in Parker & the Numberman, a hip-hop group also featuring Jamal Smith (aka 1019, aka the Numberman), and sometimes Brandon Zamudio. Their EP Early was nominated for Best Hip-Hop Album at the 2011 San Diego Music Awards, and then the band (having become a duo) won Best Hip-Hop Album at the 2012 SDMAs.

In April 2016, Edison released the Parker Meridien EP, produced by Mr. Ripley. The EP was promoted with several live performances teaming him up with local jazz cats like drummer Nathan Hubbard and bassist Harley Magsino.

“Halfway through this EP,” Edison told the Reader, “I told Nate how I wanted to do a live band for my stage show and started funneling the demo versions of my songs to him before they were even mixed. He’d get them and compose and arrange these completely different renditions with sheet music for Harley, who came on his recommendation.”

"One of the things we want to do with this project is bring back clever marketing angles," Edison said on its release. "Every Monday in February, City College radio DJ Natalie 'Natty J' Jacobs played one song from the EP, and we invited people to critique them via Facebook, Twitter, and email. They were digital listening sessions. Natalie is the Editor-in-Chief at the San Diego Jewish Journal and an accomplished artist. She's doing all the artwork for the project, and we're compiling the CD cover, digital single covers, and promo pics to make a lyric book listeners can order online."

A Parker Meridien album called Fists like Gotti was released in November 2017, with Edison and Hubbard backed by bassist John Rieder (Secret Fun Club). It featured guests like Rebecca Jade, and was mixed and mastered by Rafter Roberts (Bunky, Rafter, Free*Stars).

"We shot a 360 degree video through Audioscope, a local production company specializing in this technology, an immersive video documenting our full set at AC Lounge a few months ago, professionally recorded," Edison told the Reader. "The technology is quite a trip, to be able to turn the player and see different reactions and people in the room. It's even more intense watching it with a virtual reality headset."

Parker Meridien was nominated for Album of the Year and Artist of the Year at the 2018 San Diego Music Awards, although the initial announcement of the award ceremony where the trio was slated to perform prominently misspelled their name Parker Meridian.

A new Parker Meridien EP was released in October 2018, Twentyfist Street Sessions. "We’re usually an electric club type band," Hubbard told the Reader, "but this new music is a combination of acoustic music and poetry where we add the cello of Sharon Taylor.”

"We had been doing a few intimate gigs in the last year, poetry readings, and scaled back the full amplified band for a quieter setup of hand drums and acoustic bass, and adding a cellist," says Hubbard.

"We tracked the whole thing in John Rieder's living room over two nights, everything live including myself triggering samples, with the emphasis on a group sound," says Parker Edison. The result harkens back to the unplugged trend of the 90s, and the addition of outtakes, a live performance at a local hospital, and a new studio track.