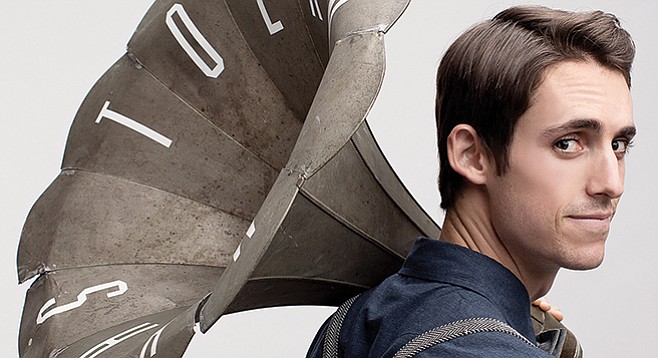 On Tuesday, September 18, Tolan Shaw became the latest to take the plunge and move to Music City, U.S.A.

“My wife Sarah and I are driving out with both of our cars,” says Shaw, 29.

Shaw launched his band the New Archaic just after graduating from the San Dieguito Academy. He assembled the ten-piece Tolan Shaw Band (including horns) to record a self-titled soul/R&B/gospel-tinged album. “We had a fun time, but it’s very hard to get that many band members to align their schedules to rehearse let alone tour.”

Shaw started playing solo about five years ago. “I really started to enjoy the fact you can connect with an audience by storytelling. You can play to a room full of people who are listening on the edge of their seats instead of a festival crowd where people may not give a shit about the music. I’ve gotten more into songwriting and focusing on lyrics.”

With Dehais’ help and booking agency connections, this year Shaw opened theater shows across the country for the Bodeans and UK blues guitarist Joan Shaw Taylor.

Shaw says his active involvement with songwriting expos have helped him network with other songwriters, publishers and music supervisors. He calls it “side hustle.” His songs have landed on episodes of The Young and the Restless, and have been used by MTV and in Verizon ads. “I also write music for a library that provides music for directors looking for specific styles or prompts.”

“L.A. and Nashville is where the music business operates,” says Shaw. “I’ve been going to Nashville for two years.” He says the fact his “quirky pop” stylings contrast with Nashville’s Americana/country DNA may help him collaborate with other songwriters.

Guitarist Tim Lowman moved to Nashville with his Blackout Party bandmate, singer/songwriter Brian Holwerda. Lowman, who now performs as Low Volts, is back in San Diego, while Holwerda stayed in Tennessee. “I fell in love in Nashville on tour with Blackout Party,” says Lowman of his two years there. “At the time, you could rent a two-bedroom house on ¾-acre in East Nashville for $650 and all your neighbors were musicians. It made so much sense to be where music ruled the town and people shared the same passion. Plus it’s a great hub for touring the south and east coast.”

But Lowman says during his time there, developers came in like a “greed-fueled tornado, flattening all the charming brick homes…it is now the same cost as living in San Diego, minus the ocean.” Lowman says he came back for a San Diego New Year’s Eve show and decided to move back. “I believe it’s crucial not only for musicians, but as humans to travel and absorb cultures and values from other parts of the country and the world.”

Lowman wrote his latest Low Volts album Roam with You in Nashville. “I still have songs I wrote in Nashville that are yet to be recorded.”

He adds, “It’s very easy to be comfortable in our constant 73-degree weather and remain stagnant. Touring and moving around, gathering experiences and being out of your comfort zone, that’s the fuel for love, compassion, and a damn good song.”