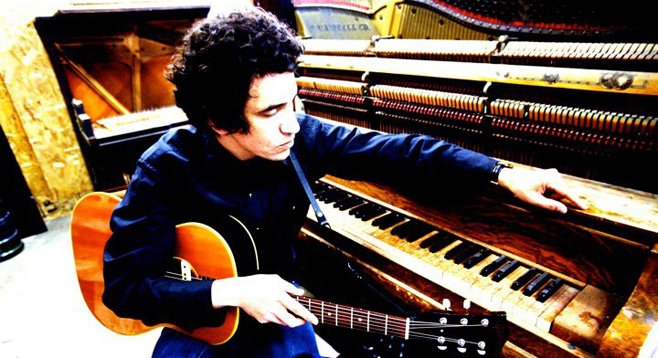 Sound description: A one-man music festival, who’ll pull an old barrelhouse boogie-woogie stride piano jam out of one sleeve, a psychedelic pop gem, or New Orleans funk groove out of the other.

When A.J. Croce was a week past his second birthday, his father, singer-songwriter Jim Croce, died in a September 1973 plane crash. A few years after A.J. and his mother Ingrid arrived in San Diego, he developed a brain tumor that cost him his eyesight. This was the beginning of what would become a success story for this nearly native San Diegan.

By his early teens, A.J. Croce had regained most of the vision in his left eye, a blessing he found difficult to ascribe to divine intervention. “I went to a Hebrew school for junior high. I followed that with a bar mitzvah and followed that with 25 years of questioning faith and answering questions with questions. How am I doing?”

Even before his vision improved, he had become an accomplished piano player and songsmith. Supporting his musical endeavors was his mom, who’d sung on early records with her late husband and whose Croce’s nightclub was an early linchpin in downtown’s unlikely transition from shore-leave sailors to Gaslamp glitterati.

Since his self-titled debut in 1993, Croce has worked with T. Bone Burnett, Jim Keltner, and Ry Cooder, among others. Among his influences, “I saw Ray Charles when I was opening the shows at Wolftrap and Ravinia [festivals], and it blew me away that he could play so slow and was so relaxed and perfect in his way.”

Each of Croce’s CDs has hit the radio charts in a different genre. His debut, A.J. Croce, entered the top ten U.S. jazz chart in 1993. The followup, That’s Me in the Bar, landed again in the top ten in 1995, but this time in the Americana and blues chart.

Subsequently, 1998’s Fit to Serve placed again on the blues chart, but also on the AAA chart, and 2000’s Transit garnered a spot again on AAA and also on the American college radio chart. His 2006 single “Don’t Let Me Down,” from his CD Adrian James Croce, is the only song by an artist on an independent label to hit the U.S. Top 40 charts in 2006.

“I’m pretty eclectic. I’ve been filed in five or six different genres in stores and on the radio, so it may be easiest to describe my music as Ray Charles meets Ray Davies, or Elvis Presley meets Elvis Costello, or John Hurt meets John Lennon, or maybe Randy Newman meets Jim Croce, which was my first concert.”

As of 2011, Croce was playing organ with local rockers the Amandas, as well as maintaining his solo stage act. In Autumn 2011, he toured Europe with Gregory Page. A 2012 release, Further On, collects his last three Americana albums: Early On: The American Recordings 1993-1998, Cantos, and Cage of Muses.

In 2013, Croce announced that his upcoming full-length Twelve Tales, partially produced by Allen Toussaint, would include guest songwriter and player Leon Russell. Singles for “Judgment Day” and “Momentary Lapse of Judgment” were made available online.

Says Croce, “Each producer brings a new unique dimension, and traveling around the US to record with all these talented players is a real treat. This project is like a musical jigsaw puzzle without a box.”

In Autumn 2013, Croce signed to Compass Records, who announced plans to release his album Twelve Tales. A 20th anniversary reissue of his album That's Me in the Bar was released by Compass Records in summer 2015, with an added bonus track.

2017 found Croce performing a series of concert featuring his father's music alongside his own, calling the production “Croce: Two Generations of American Music.” The concerts featured a band that included his longtime guitarist Michael Bizar along with Dr. John alum David Barard on bass, and alternating drummers with Nashville-based session ace Tony Morra and Gary Mallaber (Van Morrison, Steve Miller).

Around the same time, he began collaborating on his ninth studio album with producer/songsmith Dan Penn on an album featuring guests like Muscle Shoals bassist David Hood, blues guitarist Colin Linden, Vince Gill, Steve Cropper, and gospel singers the McCrary Sisters. The resulting full-length Just Like Medicine, released in August 2017 on Compass Records, features his first recording of “The Name of the Game,” an unreleased song by his father, Jim Croce.

After relocating to Nashville, his wife of 24 years passed away on July 19, 2018, causing his upcoming gigs to be postponed.

In Autumn 2018, his cover of a song originally recorded by his dad in 1973, "I Got a Name," was featured in national Goodyear commercial with Dale Earnhardt Jr. and made available as a digital single. The recording came about after an ad agency reached out with a concept for him to record “I Got a Name” for a Goodyear commercial themed “Make a Name,” which follows Dale Earnhardt Jr.’s life, from watching his father, through his own race car driving career, to his recent retirement. As it happens, the song (written by Charles Fox and Norman Gimbel) was originally recorded by Jim Croce for The Last American Hero, a biopic about the life of NASCAR driver Junior Johnson. The elder Croce titled what would be his last album after the song, and the single became a hit after his death.

A.J. says, “I heard about the commercial when I was on tour and thought the concept was sincere. There aren’t a lot of people that grow up in the shadows of a famous musician, or race car driver. I get what he lived through and he gets what I lived through. Yet, we still pursue the things in our lives that make us happy and who we are.”

The artwork for the single salutes the original cover for the I Got a Name LP, which features Jim smoking a cigar in front of a wall with plants. The image of A.J. is by photographer/musician Joshua Black Wilkins and the art is by illustrator Darren Grealish, who has created ’60s Fillmore-style concert posters for acts such as Jack White and Spoon.