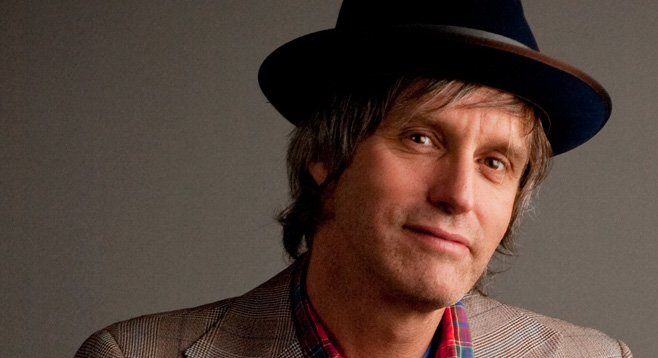 Ask Steve Poltz how he would like to be remembered, and he doesn’t hesitate: He says he’d like to be thought of as a guy who brought people together. He explains that his audiences are fans who don’t necessarily attend other rock shows. They come to Poltz gigs to be with each other in some kind of a solidarity thing that even he doesn’t fully comprehend. The Rugburns’ founder marvels at the amassing of such a curious fan base, one that extends halfway around the globe. He considers them comrades who share (or at least are drawn to) his own mental state. “And I’m not right in the head,” he says by phone from his home in San Diego.

How else to explain a singer-songwriter who can perform a fragile love song such as “Everything About You” and then turn around and sing “Hand Job on the Church Bus”? “If I don’t do that song live,” he says, “people get pissed.”

But Poltz fans also come for the stories. A broken hand proved that last year in Canada. Rather than cancel, the promoter asked Poltz to talk to the sold-out house for 20 minutes. He did, and the show ended up lasting 90 minutes, during which he played two songs with a slide affixed to his pinkie, producing music that he says “sounded like a dead cat.”

“I'm a-fixin' to join the pro-bowling tour,” writes Poltz in a blog entry at www.poltz.com/blognews. “I think music is stupid and it all sounds like noise to me. I really feel like I have style and grace when I bowl.”

His fans would be heartbroken if he gave up the six-string for three holes in a bowling ball -- Poltz is San Diego's most colorful acoustic guitar-wielding iconoclast. He formed the Rugburns with Robert Driscoll and was instrumental in launching Jewel's career (he co-penned her hit “You Were Meant for Me”). He released his first solo album with Mercury Records in 1998 and has since created his own label, 98 Pounder Records.

He's best known for his stint with the Rugburns, of “Hitchhiker Joe” fame. “We got to do a couple shows with the Ramones,” he recalls. “This was in Cleveland, in front of about 6000 peeps. Sold out. The promoter came in to our backstage room before we went on and said, 'Don't take it personal if the fans start throwing shit at you. It means they love you! Ramones fans just want to see the Ramones.'”

“We came out onstage and right away somebody threw a lemon at me and it hit Flowerpot right in the heart and left a crack. I picked up the lemon and undid my pants and squeezed it all over down my boxers and then squeezed it in my mouth. The crowd went nuts, and after the show I met Joey Ramone and watched from the side of the stage while he ran off to throw up in a trashcan. It was pure poetry.”

Regarding the instruments in his musical arsenal: “I own about 30 guitars. Several of them are Taylors, I am sponsored by them. I have names for all my guitars, and my favorite one is named Flowerpot. There is also Clackety Clack, Trailer Park, Shithead, Steak Knife, etc. I wrote most of the Rugburns' stuff on Flowerpot in my living room and on the road. I have a very strange relationship with that guitar. I feel I am too attached to it. It is a Taylor 510 that was built around 1982. I bought it off of a junkie in Santee around 1983. He had it advertised in the PennySaver. I talked him down to 700 bucks, and it was love at first sight. Not with the junkie but with the guitar.”

That Taylor 510, manufactured locally, has its own claim to fame. “I wrote the big Jewel hit 'You Were Meant for Me' on it. After we wrote it in Mexico I said, 'That song sucks. You can have it.' She took it back to Atlantic Records, and they said it was a hit. Little did I know it would go all the way up to number one or two.”

In summer 2007, Poltz became one of the co-owners of the newly opened Starlight Lounge near Mission Hills. In 2010, he turned 50, releasing his eighth CD Dream House that in July. He still drives cross country to shows throughout the U.S., and he still has unlikely but loyal fan bases in Nova Scotia (where he was born) and Australia.

In early 2011, he booked around a dozen shows in his native Canada. He may be the perpetual class clown, but he says it isn’t an easy job: “You gotta really work on your live show all the time.”

Poltz spent late 2011 opening for Glenn Tilbrook (Squeeze) on a seven-week tour of England, Scotland, and Wales. Furthering the connection, Poltz took local sound engineer Chris Modl with him to work sound for both performers. Their connection dates back to 2001, when Poltz opened a solo U.S. trek for Tilbrook, beginning a long friendship with frequent collaborations. The pair cowrote a song, “Hot Shaved Asian Teen,” which appeared on Tilbrook’s 2004 album Transatlantic Ping Pong, but lost touch for several years. They reconnected in Chicago in early 2011 and quickly made up for lost time.

In early 2012, Tilbrook and Poltz announced their plan to make a pair of albums together, one collaboration and then a Poltz solo disc. “We’ve had such a great time playing together that we have to make a record at some point,” Tilbrook said.

“We’ve become good friends,” said Poltz. “The fact that we’re talking about doing an album together is just icing on the cake.”

The occasional Rugburn opened the first five dates of the 2015 Mike and the Mechanics tour, which marked the first time Mike Rutherford and company toured the U.S. and Canada since 1989.

His 2017 album Folksinger was recorded with Jeff Berkley in San Diego. The video for his song "Hey God I'll Trade You Donald Trump For Leonard Cohen" includes the lyrics and chords, in case you want to play or sing along. By the following year, he had relocated to Nashville, TN.

His album Shine On was produced by Will Kimbrough (Emmylou Harris, Rodney Crowell) and features guests Molly Tuttle and Anthony Da Costa. Released in March 2019 on Red House Records and preceded by a single for "Ballin' on a Wednesday," it was recorded in his new home city since 2016, Nashville. A video for "Ballin' on a Wednesday" features cameos by AJ Croce, Jon Latham, and cheerleaders from Nashville troupe Rhinestone Cabaret. The ode to livin' large on hump day was shot by Stacie Huckaba in his new East Nashville neighborhood.

“My girlfriend Sharon sold the condo we were living in, and I was ready to live in a van, which seemed like a good idea for one night—then I decided I wanted a kitchen and a closet,” he admits. “Sharon wanted to move to Nashville, because she thought it would be good for me. It caused a huge fight. I’d been in San Diego since 1980, and that’s where I cut my musical teeth. I thought I’d never leave. In fact, at the height of our fight, I said, ‘I’m not leaving San Diego. I am San Diego!’ This makes me laugh now. As soon as I got to Nashville, I immediately knew I wanted to make a record in ‘Music City’.”

The next Shine On single, "Pharmacist," is a whimsical take on what might happen if a person were to develop a crush on their local pill dispenser.

"Sharon and I got married a couple days ago on Cayamo," reported Poltz in early 2020. "There were a lot of folks there. The whole thing was planned in three days. @sxmliveloud are awesome and mapped out the whole shebang and there were about 1500 folks there. Insane that this could even be organized so fast. We were just gonna go to the courthouse in Nashville."