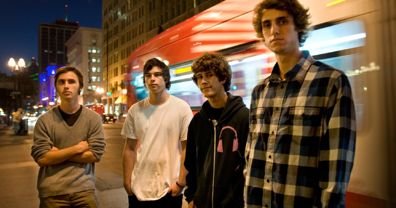 Based in Encinitas, the New Archaic was formed in early 2007 by Joe Harrison (guitar, keys, flute, vocals) and Sean Carroll (drums), friends since grade school. The duo emerged from the local punk scene with their previous band, the Wrecking Crew, which toured with the Adolescents. The New Archaic's definitive lineup was rounded out by Tolan Shaw (lead vocals, keys, guitar) and Tim McNalley (bass, vocals).

According to their website, “The New Archaic’s sound is far removed from that of punk but rather borders along the Alternate/Pop/Rock genre.”

Asked by the Reader to elaborate, Shaw describes their sound as “Indie alternative rock with textural elements and layers that catch your interest and make us stand out from other bands.”

Harrison: “It kinda sounds like if John Bonham and Thom Yorke were taking a bath together, while Brian Eno was in the kitchen making an omelet, and Motown’s back-catalog was in the basement doing laundry.”

After releasing their five-song EP Outlined in late 2009, lead vocalist Tolan Shaw spent early 2010 traveling around the world with Semester at Sea. A junior at USD, his spring semester was spent on a cruise ship traveling some 24,000 miles, with ports eight countries including China, Japan, India, Brazil, and Vietnam. “I got full school credit, met a ton of amazing people, and saw so many cool things,” says Shaw. “I recommend it to everyone and anyone.”

Joe Harrison (guitar, keys, vocals) spent his summer on tour with the Adolescents, with whom he and New Archaic drummer Sean Carroll have played in concerts dating back several years.

Their debut full-length Movers and Fakers was released in summer 2010. Engineers on the project were Ben Moore and Chris Hobson, with Moore completing the mix. Recording came together at Blue Roof Studios, Big Fish Studios, Solana Beach Presbyterian Church, and various home and garage studios. Mastering was done by Mark Chalecki of Little Red Book Mastering in Los Angeles.

In 2010, the band took on an industry consultant, Michael Rosenblatt with Lp33.tv, best known as the person who discovered Madonna, Depeche Mode, and the B-52s, among others. Rosenblatt calls TNA “the best new American band I’ve seen in ages.”

Going into 2012, the band included Tolan Shaw (vocals, guitar, piano), Joe Harrison (guitar, piano), Tim McNalley (bass), and Andrew Ware (drums). However, the group became inactive after playing in Hollywood at the Federal on May 21, 2012. “The New Archaic is no longer happening,” frontman Tolan Shaw (Sister Speak) told the Reader in early 2013. “We're all in other projects, but still collaborate together. That's not to say we'll never play or record again.”

After graduating Berklee in 2013, Harrison stayed in Boston with Art Decade, touring in April 2014 and recording several live videos along the way. After relocating to Brooklyn NYC, he toured and recorded in England with fellow Berklee grad Sarah Walk, and spent summer 2014 touring with the Adolescents.

McNalley graduated UCSD in May 2014, splitting his time with his dad’s band the Hutchins Consort, Ron Bondurant, Privet, In Motion Collective, and Second Cousins.

Casey graduated from San Diego State University in 2013 and started his own music business, as well as playing with the Styletones, Rebecca Jade & the Cold Fact, In Motion Collective, and Second Cousins.