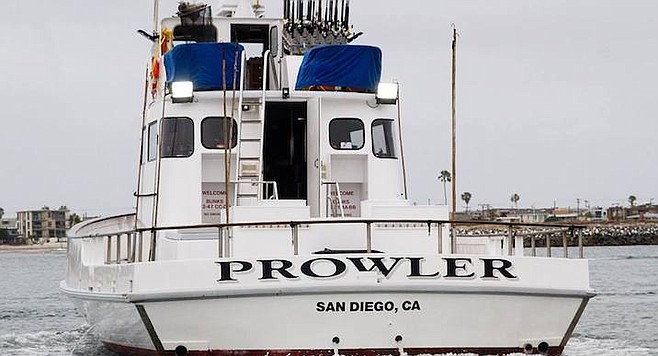 Sportboat Prowler a total loss in collision, one dead

Good fishing can disappear with a little wind and cool upwelling

Saltwater: Big bluefin tuna are holding on and around Tanner and Cortez banks, tempting a few of the 1.5 to 2.5 day boats to concentrate on them. The area of fish runs from just off the southwest end of San Clemente Island to the west side of the above mentioned banks. The New Lo-An has been keying on the brutish fish and has had some good days, and a few slow days, too. Even on the days they aren’t biting well, meters and eyeballs can verify that the fish are around. Most of the fish are in the 40- to 100-pound range, though there are some chunky fish in that area up to nearly 300 pounds.

The bite down south outside of Ensenada is going strong on yellowfin and skipjack and a few dorado and yellowtail in the mix. The majority of the mid-range fleet has been fishing that area and should continue to do so as long as the weather and water temperature holds. This time of year, it can all disappear with a little wind and upwelling cooling the water quickly as the tuna like their surrounds a bit on the tepid side. Boats are watching for mammals to show the way when searching for these fish. Usually tuna fishing involves trolling while spying for kelps and keeping an eye on the meter. Large pods of dolphin are never overlooked, as yellowfin and skipjack are found under them.

The Prowler had been doing well in both areas of fish; their overnight runs were south for the yellowfin and skipjack while their longer runs were made within a few degrees of a due west heading for the bluefin that are some 60 miles out. Unfortunately, after a trip south, the popular boat and crew suffered a horrible accident on the return leg of their trip when they were struck on their starboard side by the 330-foot mega yacht Atessa IV just nine miles off the coast near the international border. Though the Prowler did not sink, the damage to the sportboat was substantial; early estimates reported that it is a total loss. One person lost his life and two others suffered injuries. A Coast Guard vessel transported 17 of the 29 people that were aboard the Prowler, while the Atessa IV, which sustained minimal damage, transported the remaining 10 back to San Diego.