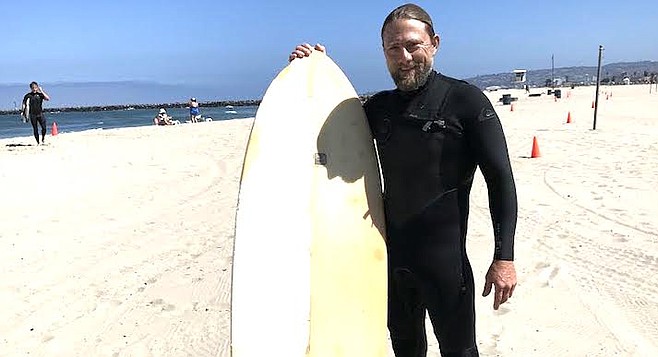 Mike was ripping a large chunk of his board off.

“Yeah, I knew this board needed to get retired. I heard it crack out in the water. This is a Turbine fish. I’ve had it since ’03. A board shouldn’t be doing this, but I’m bad about keeping up with ding repair.”

Mike has been surfing since 1994. "It’s changed my life for the better. I’d probably be fat now, drinking beer in San Jose.”

Worst injuries? “I came close to cutting my nut sack once, that was probably the worst. I landed on my fin and it cut me deep right next to my you-know-what. I’ve also had Pterygiums, or Surfer’s eye. It’s a growth that’ll grow over your pupil if you let it go too long, it’s from ultraviolet light.

“OB is not as crowded as some places. I’ve surfed up at Huntington Beach and Trestles, those are probably the worst I’ve intervened a couple times and almost got my ass kicked. I only really get into arguments in the water when I am defending other surfers like someone yelling at a beginner. It’s been like that always but I think it’s mellowed out because the younger surfers are use to crowds, so it doesn’t bother them as much.”