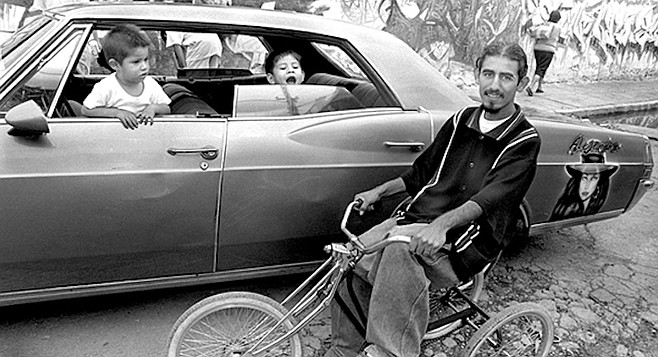 Our Lady of Guadalupe, drug-war dead, the border from above, filthy rich girls

Modern Masters from Latin America reminds us, if we need to be reminded, that Modernism knew no borders. Point/Counterpoint, a compelling selection of 19 contemporary Mexican photographers currently at the Museum of Photographic Arts, has borders on its mind, the actual physical borderlands separating Mexico from North America and the social, moral, and political borders that define human activities. Smaller in size than the Pérez Simón exhibition, Point/Counterpoint has more dash and punch, and a generous breadth of visual idioms, from street photography to conceptualism to ethnography.

Some of these photographers are interested in the fervor and social ambiguousness of religious visions. Since 2007 Federico Gama has been going to Mexico City for the annual feast day of Our Lady of Guadalupe, when Mexicans from all walks of life gather at the Basilica to celebrate her. Everyone bears an image or statue (or, in one instance, wears an Our Lady costume), and the devotees have many identities: an Indian family; a punker; a homeless man; a student; and, most prominently, gangbangers. 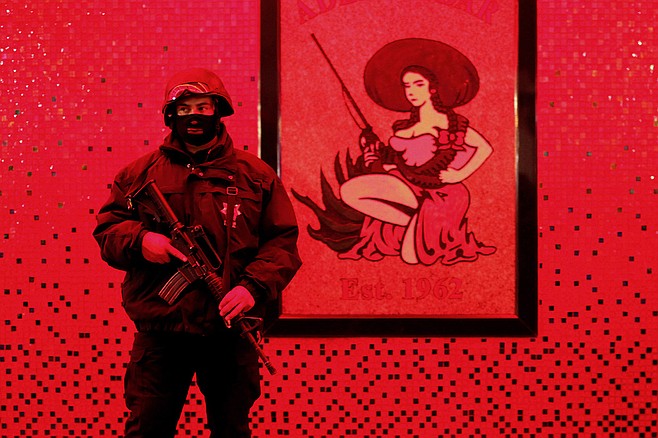 A Federal Police officer guards outside a bar during a special operation at the Zona Norte area in Tijuana, Mexico, Friday, June 12, 2009, Guillermo Arias

Gangsters of many kinds tend to be religious sentimentalists, like the man-boy Gama photographs whose face is written over with prison tattoos, and the two wiry, head-shaven men, one with an Our Lady tattooed on his back, embracing and flashing gang signs. There are pieties and there are pieties. Provoked by a 2012 “end of days” prediction, José Luis Cuevas has been making an episodic essay on spiritual adventurers that includes nervous, unsettling images of priests, UFO worshippers, masons, and witches. Some of Cuevas’s images starkly represent soul conditions. A serpent’s head dangles through the blank space of the picture frame, as if waiting for us to enter it, too. The most thrilling image in the show is Cuevas’s picture of a cave light-flecked by hundreds of bats flaking through a syrupy darkness. 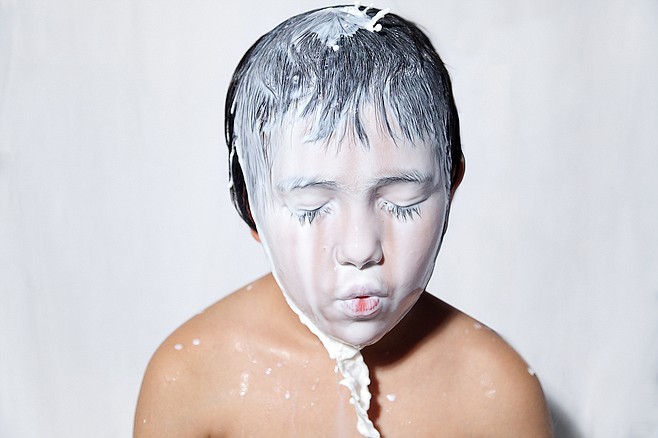 A lot of the work here is saturated by drug crime and death. Teresa Margolles spells out suicide notes (example: “Por la costante reprecion que recibo de mi familia”) on the marquees of abandoned movie houses in Guadalajara, and Guillermo Arias’s series Muerto diario (“the daily dead”) observes the too many varieties of bloody drug-war scenes: a corpse hangs from an overpass, a police car bashful in the background; a youth with bullet holes in his T-shirt sprawls on a dirt road with other “trash”; an intense theatrical spotlight falls on a gloved detective’s hand marking crime-scene evidence, which tells us that with tens of thousands of bullet casings to tag and examine in many Mexican cities, no law enforcement can keep pace with drug crime. And if we need visuals to conceive the scale of all this, Pablo López Luz’s aerial photos of borderlands, the barren landscapes of its far reaches along with the crowded towns that crop up along the way, expand the dimensions of “border” issues. 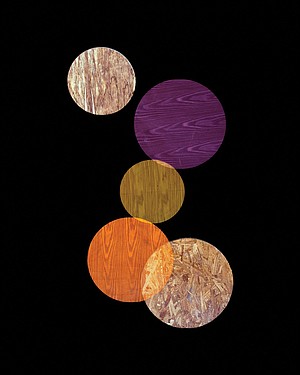 Another kind of separateness runs between the very rich and everybody else, defined by the ability of some Mexicans to insulate themselves from the street violence other social classes have to live with. Yvonne Venegas has made images of inhabitants of San Pedro Garza García, one of the wealthiest communities in the country. Her shots of polo players, children in a garden, and well-to-do couples young and old, have a crisp realistic finish but the subjects and scenes are all “off” in some way: why are we looking over the shoulder of a young man — servant? boyfriend? — bringing a cup of coffee to a woman waiting on a bench in an unidentifiable place? Why does a vacant, idyllic clearing in a park quiver with menace? 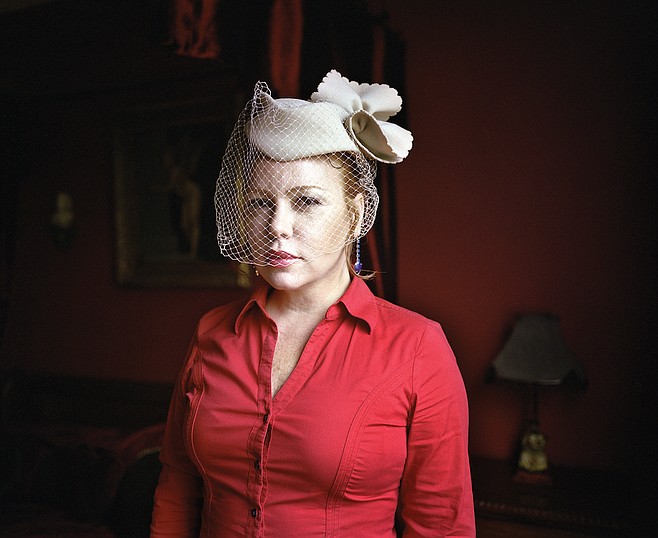 Daniela Rossell, an impeccably educated member of the upper middle class and self-described “child of the P.R.I,” the Institutional Revolutionary Party that governed Mexico for 71 years, persuades girls she grew up with, filthy-rich girls, that is, to pose in their domestic surroundings, which are stuffed with the gold-plated gauds and vulgar, crass imagery that some plutocrats consider high art. To many of us, it’s in spectacularly bad taste. Rossell’s friends happily collaborate on the scenes and poses. The moral tones are inflected almost to incoherence. It’s hard to tell where self-regarding irony begins or leaves off. In one picture, a dozen or so self-absorbed young women strike smugly alluring odalisque poses in a harem, in imitation of an actual image of a seraglio that covers the wall behind them. Rossell also gets the patronizing cynicism of certain people who turn history into a personal precious artifact. A feisty blonde sitting in a saddle perched on a study/library table dressed as a showgirl-cowgirl (red heels, hot shorts, Stetson) flicks her cigarette at what’s around her, namely books and images of Zapata and other Mexican worthies. It announces that crude wealth treats history and learning not as the furnishings of consciousness but as the personal frivolities of the entitled.