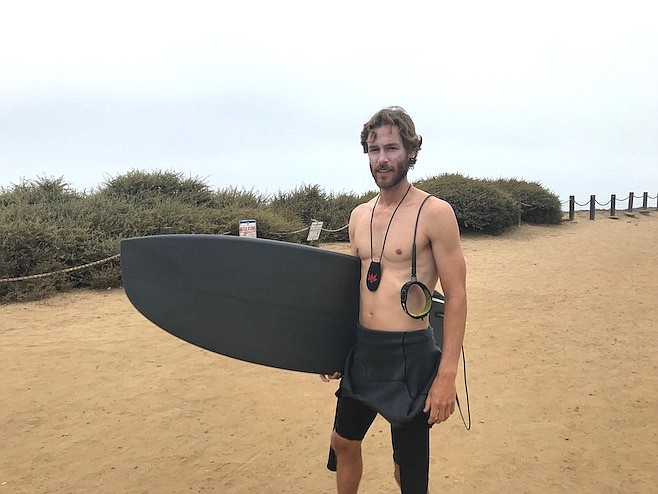 Ran over by dolphins

I had to paddle to get out of the way

Hayden Gore was heading down the long flight of stairs at Sunset Cliffs when we stopped to chat. Gore first started surfing in South America, six years ago. “I  grew up in the middle of the country and the ocean was always a little terrifying to me. But then we moved down to Lima, South America and some buddies of mine took me out. I just immediately realized this was the abiding passion of my life.”

Gore enjoys San Diego surf, despite better conditions in Peru. “[In Lima] it’s a cobblestone break, similar to what you have up in Trestles. They get tons of swell from the Southern Ocean almost everyday. I’ve never seen it flat, and a two-to-three foot day is disappointing. Where as here in San Diego, it’s going to be alright. But San Diego is great; the surf culture here is really strong.”

“A couple weeks ago I was up at Moonlight Beach on an easy day, two-to-three foot, and I wasn’t sure if I wanted to paddle out. But I did and in a few minutes a pod of six dolphins showed up. They were riding waves as they made their way north to where I was, until there were three side-by-side coming right at me while a fourth went right behind me. I had to paddle to get out of the way. But there’s been so many times like that; when you don’t feel like paddling out and then you do, and there’s dolphins out the back or seals in the line-up. It reminds me why I surf.”