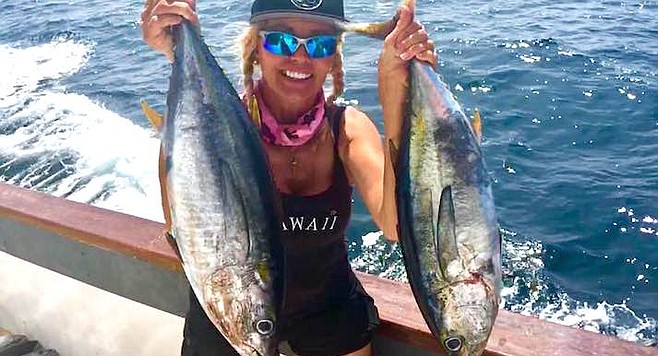 And the importance of kelp paddies

Saltwater: Yellowfin tuna and skipjack tuna have exploded in the counts over the past couple weeks as most folks predicted they would when the water warmed and the fish filled into the offshore banks. That was an easy call, but the fish stayed tight-lipped for a long while. The tuna are now engulfing just about anything tossed in front of them. Though the fish are as close as 9-Mile Bank, most yellowfin and skipjack are coming off the Baja coast from southwest of the Coronado Islands down to an area about 50 miles south and 25 miles off the coast, due west of Salsepuedes Bay.

As sportboats don’t need to travel much further and the fish are thick in that area, and if you add in the private boaters and pangeros, the screen set to a ten-mile range looks like a parking lot on the radar. The other area of interest is the spot of bluefin tuna that runs from a few miles southwest of San Clemente Island out to the Cortez and Tanner banks. That bite is still producing cow tunas to over 300 pounds.

If you prefer jacks, there are the dorado and yellowtail. They are coming from paddies offshore, or drifting mats of kelp that have broken from roots. This happens as the giant kelps grow tall in the water and surging conditions rip the plants loose.

The tides that deposit loose kelp on the beach also takes it out to sea. The kelp that drifts asea unites in time as wind and current accumulates it and forms the loose strands into a tangled mass known as a ‘kelp paddy’. These paddies can be a few yards wide to as large as a basketball court/ Once found, kelp paddies are currently holding large schools of dorado and occasional yellowtail. Generally, in this part of the Pacific Ocean, once you find one kelp paddy, work a north-south pattern looking for more as the normal WNW wind tends to line them up on a north-south line.

Dorado have been caught from kelp paddies within ten miles of the Mission Bay jetties this week, so I wouldn’t be surprised to see a few come into the La Jolla area. I expect this yellowfin and skipjack fishing to continue for weeks and maybe months, as there is still a lot of bait in the water and not much storm activity moving north that might cause upwelling to cool down the top portion of the water column.