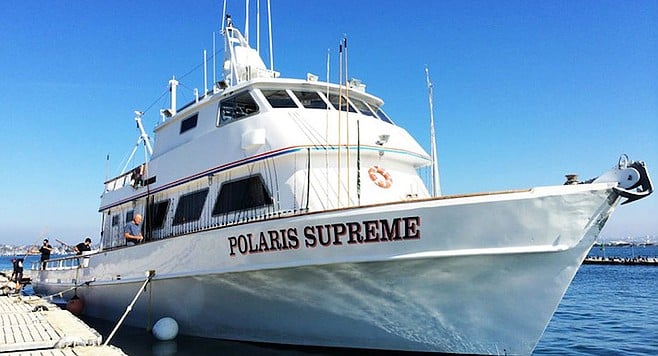 Saltwater: Some 1,200 fewer anglers hit the water this past week as the fall school session began a week before the three-day weekend that signals the end of summer. Even the most avid young anglers know that playing hooky to go fishing during the first week of school would be greatly frowned upon by instructors and parents alike. Seems like some of the yellowfin and skipjack tunas were absent though; the yellowfin count was halved from the previous week and the skipjack count dropped by a little more than a third.

Most of the yellowfin, dorado, and skipjack are coming from the 421 and 390 area, or about 50 miles southwest of Point Loma. That is the same area that has been looking like a parking lot lately, and most of the overnight to 1.5-day fleet heading south is fishing there. A couple longer range boats are running further south; the Excel is aiming toward Cedros Island and the Polaris Supreme looks to be going out to Guadalupe to try and wrestle some large yellowfin from sharks.

There are large sharks at Guadalupe Island. The average female is fifteen to sixteen feet long while the average male great white shark about twelve to thirteen feet.

The three-quarter and full-day boats going south are staying near the Coronado Islands for the yellowtail and calico bass fishing, with an occasional tuna or dorado. Bonito are showing good from the islands north across the border and are biting off Point Loma and La Jolla. The local yellowtail fishing has picked up a bit off La Jolla for the private boaters and kayakers working the outside of the kelp, and though the wind has been stiff on most days, the anglers continue to get out there. As the Shelter Island boat ramp is still down and will be for a while, the ramps at South Shores and Dana Landing are getting lots of use and the logical choice when heading out of Mission Bay to fish inshore is going to be towards La Jolla.

There have been sparks of tuna along the upper Nine Mile Bank in U.S. waters, but other than the bite out at the 421, the best fishing north of the border offshore has been about six miles southwest of San Clemente Island, where the big bluefin are being caught. The Chief, Tribute, Vagabond and other 1.5 to 2.5-day runs have been concentrating their efforts there, while occasionally making a twenty-mile run from there south-southwest and looking at Tanner Bank.