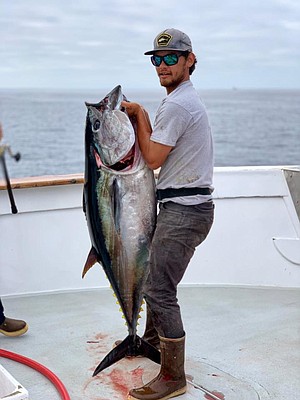 Saltwater: The tuna counts settled down to about even across the board, with a rare seasonal case of more bluefin than either yellowfin or skipjack caught. This is due to the good weather offshore and the massive fish being caught now mostly off the Cortes Bank, as the fish have shifted through the summer/fall from just below San Clemente Island to Tanner Bank, and finally holding on or near the Cortes. Good weather outside, no passport required, and crowded grounds down south has prompted more boats to go for the bluefin in U.S. waters. Because of a limit of two per day per angler, and an average of about 90-100 pounds (the smaller units are in the 40s while the larger fish are topping 250 pounds) anglers aboard the 1.5 to 2.5 day bluefin trips are getting a lot of meat.

Bonito continue to swarm inshore off the kelp to out along the 9 Mile Bank down to the Coronado Islands, where yellowtail are biting, albeit a bit on the slow side with occasional flurries. Boats moving further down the line are finding good rockfish, whitefish and some lingcod on the bottom with bait and jigs, along with yellowtail on the yoyo iron mostly, though a few are active in the upper water column and eating fly-lined bait as well as surface irons. Yellowfin, skipjack and dorado are holding in areas offshore along the Baja peninsula’s upper half. Though the counts have fallen off for yellowfin and skipjack, their numbers will fluctuate and include a few good hits before the pelagic season winds down within the range of San Diego’s 2.5- and 3-day fleet. From that point, yellowfin will be targeted by longer-range vessels of five-day trips or longer during winter season. That said, the bluefin look to be going nowhere fast.

Back in the local waters, calico bass turned on in the kelp as the tide swing set up good for the ½- and ¾-day boats targeting inshore this past week. Sand bass bit on the flats in 50 to 80 feet of water on plastics fished just off the bottom or dropper loops baited with squid or live sardine. As water temps hold in the high 60s, I expect the bass to continue to bite for the boats opting for the kelp edge and sand flats instead of targeting rockfish. The lobster boats running in the evening are getting a 1/3.5 ratio on legal to short bugs raised.