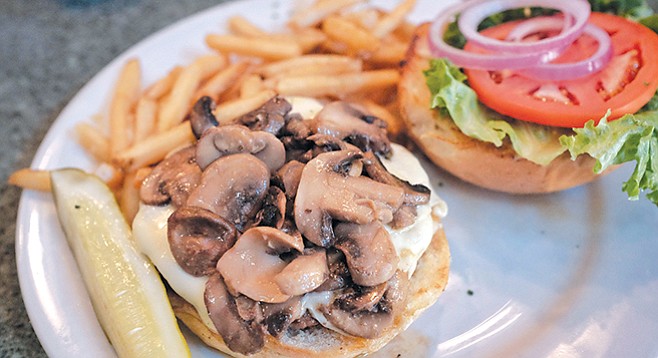 Burgers with a side of ambience

We all know what makes a burger. It’s gotta have ground beef, or at least ground something. Mash it into a patty, fry it, grill it, broil it, or nuke it (you know who you are), top it with some cheese and veggies (or don’t), and wedge it between two buns. That’s all you need. You can add just about anything and it’ll still taste pretty good. But who cares? Sometimes a burger is made not by what you shove inside it, but what you place around it. That being said, here are a handful of joints whose ambience matches and occasionally surpasses their ingredients.

Not to be confused with the homophone up the street in a Scripps Ranch strip mall, Brewskis is annexed to a Miramar strip club that eschews modesty as readily as the bar does apostrophes. It may be slandering intuition to suggest that this could be home to a killer burger, yet there she is — glistening on the bar-top to the soundtrack of one million pinball machines hitting jackpot in unison and yawps of profanity from the pool table. $7.75 for a half-pound of Angus beef, lettuce, tomato, pickles, and onion on a brioche bun. That, my friend, is a burger.

Equally aloof to the confines of written language, Bruski cooks much like they spell: however the fuski they want. While their 24 craft taps are accompanied by a short catalog of burgers (fries sold separately) loaded with everything from kielbasa sausage to chipotle aioli to marinara sauce to Asian slaw, one of their crowning achievements comes in the form of the relatively minimalist Southern Goodness Burger. Smack a beef patty with fried pickle chips, bacon, mustard, and American cheese. Charge $8.95. Chase with a $4 (generally local) beer of the month. It’s almost too good to be truski.

Back in Top Gun country, this satellite of an Oceanside brewery makes one of the better burgers on this list. Legacy’s $10 Classic Burger comes with a triple grind of short rib, brisket, and chuck beef. It’s salty, savory, and surprisingly lean, served with fresh veggies and a white bun.

The most recent addition to a local chain of upscale dives following suit with fellow Grand Poobahs of the ground patty such as the Waterfront, Werewolf, the Hills, and Eastbound, Banzai puts Midway on the map with its house burger: ⅓ pound of juicy beef, house sauce, and grilled onion — it’s almost elegant in its simplicity. But if that razzle dazzle life keeps calling, spice things up with the savory Brussel Burger, featuring a patty, parmesan, house sauce, balsamic glaze, crispy bacon, and, of course, the eponymous sprouts.

With Sunrise's over 33 years of worldly experience, this Casa de Oro deli does a little bit of everywhere with not a lot of frills. Travel through space and time via offerings such as Montreal’s Monte Cristo, Philadelphia Style Sandwich (cheesesteak), Miami Nosh, Brooklyn Reuben Delux [sic], a Denver or Malibu omelet, and the New Jersey Devil. Or just go back to being a ravenous stoner college kid with the $9.99 Starvin’ Marvin Burger, flaunting a ½-pound stack of beef, a few strips of bacon, melty cheese, a bunch of avo and mushrooms, and a dollop of 1000 Island.

Standing in the corner of a California mission-themed mall, San Marcos Brewery has been making bubbles since 1993, long before every garage, loading dock, and granny flat in the county was fermenting nano-batches of international fusion brews in a charred oak combat boot. As a result, they’ve had a considerable head start on their house Hefeweizen, which comes out singing of crisp orange and coriander, and makes one hell of an afternoon companion to their Mushroom & Swiss Burger — a half-pound beef or turkey on a kaiser roll with your choice of french fries, brown rice, or fresh fruit.

If you haven’t grokked it yet, this whole burger thing is often more about where it is than how it was. Tivoli illustrates this with aplomb. Their aggressively average burger is elevated with the knowledge that the “Oldest Bar in Gaslamp” (circa 1885) was rumored to be frequented by Wyatt Earp back when this was the Stingaree red light district. How was it? Probably a little rough around the edges. Like the burger. But so what? Burgers were born in places just like here, sizzling somewhere between the blacksmith’s armpit and a harlot’s garter. This is it. You have arrived.

The splendor of Balboa’s burgers is almost as well-established as the dangers of gazing directly at the eclipse. But, cautionary tales be damned, I can’t stop staring into this celestial crescent of beef peeking out from beneath the partial eclipse of the bolillo bun. Any stranger on the street can tell you why this place rocks, so I’ll just add some gossip from the burger circuit and mention that Balboa expects to open a second location in downtown Chula Vista by the end of the year. The 4000-square-foot locale at 290 Third Avenue will offer a nearly identical menu sans cocktails, pending liquor license.