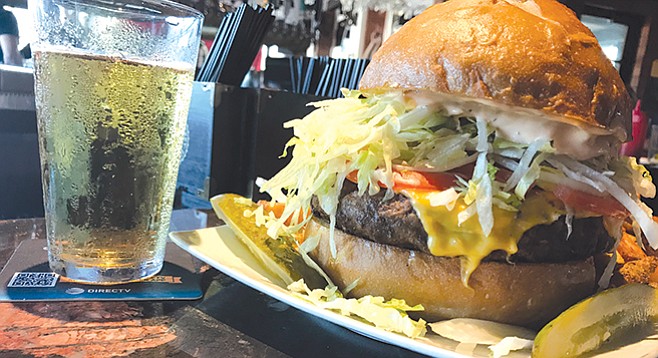 Gimme the biggest burger you got

This time I’m thinking don’t spare the horses, think BIG! So I got the biggest burgers these places had, and the climax was out in Rancho San Diego, where Nicky Rottens has a two-pound, $30 burger deal going. Not a problem! The other surprise was the Tivoli. Chef Réné pulls out all the stops to make a delicious mess of your face and a permanent bulge out of yaw tummy. Yes, today’s burgers are sinful, definitely not PC. But just think: you can jog it off tomorrow. You can swear to eat nuts and twigs for a month. As gramma always said, a little of what you fancy does you good.

For Werewolf, et your canines into a really good, top’ o the line Triple Threat burger. It’s got a half-pounder inside, which can be maple-glazed pork belly or beef. Pork burger comes with fried egg, lettuce and bleu cheese aioli. The Mushroom Melt is half a pound of beef in a sea of shrooms doused in “wolf steak sauce.” But I discovered something else: Boar Sliders. Killer surprise is blobs of jalapeño blackberry compote they put in with crispy onions on top, sitting on the boar meat. Brilliant combo! And in HH, cheap! You get half off.

You want traditional burgers? Longhorn is your place. It feels like the original Cheers bar, unchanged for 50 years. If you had any doubts, the walls are plastered with John Wayne pictures and memorabilia. So, customers expect their burgers consistent. Most order The Duke burger. Because it’s double everything. Double cheese, double meat, double onion rings, and bubbling BBQ sauce plus bacon. Fries are worth the extra buck just to mop up the mess. And the rest of the fun is the crowd. They all know each other, but they’ll include you, toss you round the conversation like a shuttlecock. It’s like a food fight with your rediscovered family.

Come to this tiny counter late, when people head in here to sober up after downing some on the Avenue. They’re usually at the fun stage and repeating jokes or tell-alls. As with the Longhorn, a late night sitting up to this J-shaped counter becomes a communal experience. Burgers are all ½-pounders, but the one to go for is the Breakfast Cheeseburger. Why? Because a) you get the egg, and b) you get a whopping load of avocado, along with nice thick bacon. Have it with fries (onion rings are extra), and — this is a must — order their thick-cup bottomless coffee, and maybe share a fried ice cream. It’s an indulgence that you’ll probably pay for. But oh-so worth it.

No, Nessy Burgers are not made out of sea monsters from Loch Ness. Actually, the owner, Sandra Webster, has always gotten her meat ground each morning by a butcher in nearby Fallbrook. And the patties are always hand-slapped into half-pounders. Get the Nessy burger or — slightly more expensive — the top sirloin steak burger. They’re just good generous burgers, but the bonus is the sweeping views (and the sweeping winds) you get over the valleys to the coast from this geedunk’s hilltop position as you eat. Only the Scots could pick such an aerie. Call it chew with a view.

Yes, people love the Tivoli (when you spell it backwards, it reads “I Lov It”) because it’s a dive bar. It’s the oldest bar downtown. And deep in its guts, the Café 505 is a kind of louche burger adjunct. But the big news here is that its cook, Pierre, is from Paris, and he knows his cooking. The taste comes through. Things are often frantic, so you need to know what you want. And for me, no contest. The double cheeseburger is top of the heap. Two sloppy-big garlicky patties, nicely burn-grilled with oozy, red-sauce-mixed cheese above and below, plus pickles, sautéed onions and sparkling fresh green lettuce. 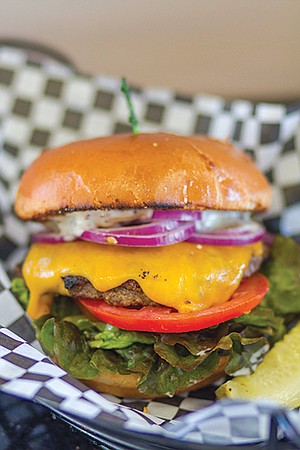 Honestly, it looks corporate. It feels corporate. It probably is corporate. But corporate trying to adopt the whole Organic revolution. That’s why it’s “Cali O.” These guys promise organic ingredients, locally harvested where they can, including the grass-fed beef. And that the cows lead happy outdoorsy lives till the bonk on the head. Go for the basic Cali burger, just because the flame-grilled meat tastes so good, specially if you have it with sweet potato fries. Their bison, elk, and ostrich could be interesting. And their really good imitation of meat in the Sonoma burger, which is vegan, does encourage you to break the meat habit. In fact, coming here may save your, uh, bacon.

You don’t have to do this, eat a 2½-pound burger just for glory and a tee shirt. If you do, it will cost you nearly $30. I tried (see Tin Fork, 9/6). It’s a task that Nicky Rottens calls “Da Ultimate Burga Challenge!” Maybe you should do it once in your life. I got three bites in. And you’ll never have a bigger burger. But really, first, look at all Rottens’ really good standard burgers: I go for their “Bacavo,” (bacon and avocado), their “Maui Wowi” grilled pineapple burger, and above all, the “Stinky Burger,” filled with bleu cheese, smoked bacon, and more stinky bleu cheese. Love it! Even (especially) if it doesn’t weigh 2½-pounds.