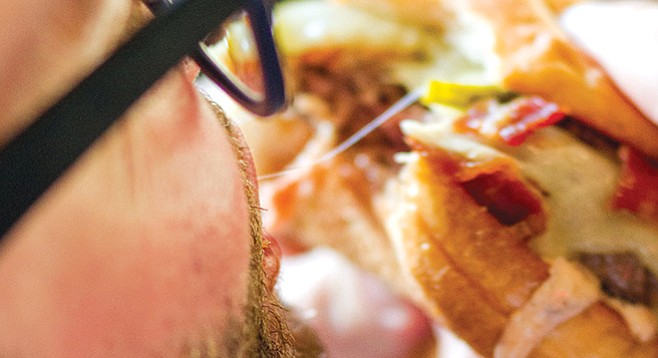 Although the hamburger was named after the German city of Hamburg, America is the country that made it great thanks to access to relatively cheap beef, wheat for the bun, and the imagination of a nation of immigrants. Like the blues or backgammon, the burger is something that takes minutes to learn how to make and a lifetime to master. These places are doing them right in their own ways.

This new addition to the Imperial Beach dining scene, Verandina, is known for Italian food, but burger lovers will enjoy the restaurant’s variations on burgers. Both the Sicilian burger and Veal Cotoletta burger are breaded before cooking, which adds a pleasant crunch. The Sicilian is topped with tangy fontina cheese while the Cotoletta has spicy provolone and a chipotle aioli top. Both are nice variations that even burger traditionalists will appreciate.

This downtown Greek-themed restaurant’s take on a burger is pretty dang special, mixing both seasoned ground beef and lamb into a patty that also includes feta cheese, garlic, mint and mushrooms (among other ingredients) before topping it with swiss cheese, spicy feta and a garlic aioli — no ketchup needed. It’s tangy. It’s juicy. It’s packed with flavor. Although it comes with skinny fries topped with feta, you might want to pay extra and the house lemon potatoes served on the side — they are wonderful!

The Ground Chuck Norris is the star at this Normal Heights sports bar, and it’s proof that simplicity and quality can be a burger’s best friend. One bite into this behemoth and you can immediately taste the high quality beef. Other than a house louie dressing (similar to thousand island), cheese, and some of the very spicy house ketchup, it doesn’t need anything else — except maybe the fries, which are thick and crisp on the outside but soft and puffy on the inside (get extra spicy ketchup for them.) However, it does come with a fried bacon-wrapped jalapeño that is a nice amuse bouche. I’m also a fan of the No Manches Margarita, which blends tequila with passionfruit, lemon, lime and agave to make a tangy counterpoint to the burger.

This casual burger bar has been open less than a year, but has earned a fervent following for its high-quality burgers, especially the Royale With Cheese, which takes a patty of grass-fed beef on a housemade buttermilk bun and adds crisp bacon, mustard pickles, caramelized onions and gruyere cheese. Freshness drips from each juicy bite. The Diner Burger is a little smaller and subs out American cheese and a sesame seed bun, but packs a lot of flavor.

National outlets such as Maxim have called Coaster Saloon one of America’s best beach bars, but the place has upped its game by adding barbecue to the menu. If you want a taste of the “que,” but still want a burger, get the “Q,” which is a patty topped with pulled pork. My personal fave is the TJ burger, which has pepper jack and a fried jalapeño, along with lettuce, tomato and onion. The fries are hot and crisp and match well with the tangy Texas-style sauce used for the “que.”

The burger at this farm-to-table eatery on the La Mesa/San Diego border is a true flavor bomb, thanks to the gorgonzola cheese and caramelized onions that top the patty, which is made from high-quality Brandt beef. Yes, the burger comes with fries — tasty ones — but the housemade pickles and citrus slaw add a bracing bit of tang that helps cut through the delicious richness of the burger. This is a burger made for a glass of red wine, not beer.

Located in the very stylish mid-century swank of the Pearl Hotel, Charles + Dinorah is the type of place Don Draper might eat on vacation. The burgers are simply made with a pretzel bun and smoked American cheddar, but not simple-minded. The beef is so good, you may want to treat it like a steak and get it medium rare. This burger goes great with a beer, especially a light fruity Berliner Weisse.