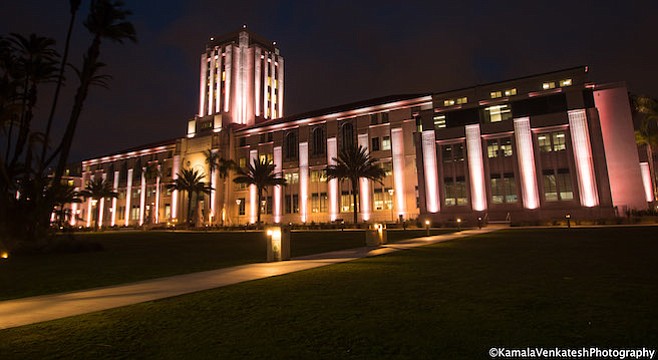 The Port of San Diego on Wednesday evening (March 29) unveiled two new plans for the continuing redevelopment of the Embarcadero section of downtown waterfront running north from the USS Midway to Laurel Street along Harbor Drive.

The design proposals were adapted from a larger selection presented to a crowd of about 100 at a preliminary community outreach in February, and are subject to further revision before a plan is presented to the Port's board of supervisors in May.

"We heard a lot of questions about traffic and circulation, and how it would be affected by the various alternatives," said Scott Jordan, an urban planner with Civitas, the Denver-based design group retained by the Port for the Embarcadero project.

Indeed, both of the proposals would scale down vehicle traffic on Harbor Drive, with one reducing the street to one lane of travel in each direction from two currently, and another closing the street entirely to vehicular traffic in front of the county administration building.

"We want to emphasize the waterfront as a pedestrian experience," Jordan continued, describing goals for the project including an expansion of public park space with dedicated walking and cycling paths, replacement of parking lost by removing lots west of Harbor, and identification of a site for a "destination" public space, which at this point is centered on an expansion of the facilities surrounding the county building.

Suggested uses for the space included outdoor gaming areas and interactive art pieces intended to invite children to play on and around them, sports rentals and food vendors (the popular Carnitas Snack Shack installation in an already-completed section of the Embarcadero was mentioned several times), and grassy open spaces sloping down toward the bay to create scenic viewing elevations and possibly allow for events like community movie screenings.

Funding for the project and its ongoing maintenance, potentially costing hundreds of thousands per acre on an ongoing basis, would come from a variety of government and private sources including Port bonds, federal and state grants and loans, and revenues from leasing the grounds out for festivals or to private vendors including the disputed former Anthony's restaurant site.

"We really do believe this is going to become a place that everybody wants to go," Jordan told about 50 meeting attendees. "The whole theme here is that we want to create one continuous experience with a series of different experiences along the waterfront that will give more people more reasons to come down and visit, especially residents."

Some proposals! "The presence of programming in parks, rather than the existence of parks per se, drives real estate value creation....Costs will be higher for a more ambitious and actively programmed park, but many programming elements can be monetized, including for sources of operating revenue." And they specifically use tourist trap Belmont Park as an example to emulate.

This isn't about emphasizing "the waterfront as a pedestrian experience": it's about taking space that should be freely enjoyed by all and sanitizing it of the poor while increasing returns for developers. If the Port actually cared about the pedestrian experience of the waterfront, they wouldn't have approved "a dock twice the size of the Anthony's dock that the commission's report said will be used exclusively by Brigantine customers."

And anyone who has to do business at the County Administration Building will tell you there are already enough problems with finding parking both on the surface and in the new garage without competition from carny sideshows and paid spectacles. Limiting or eliminating vehicle access to it while relocating existing parking even farther away is punishing when so many tasks can only be done here and in person.