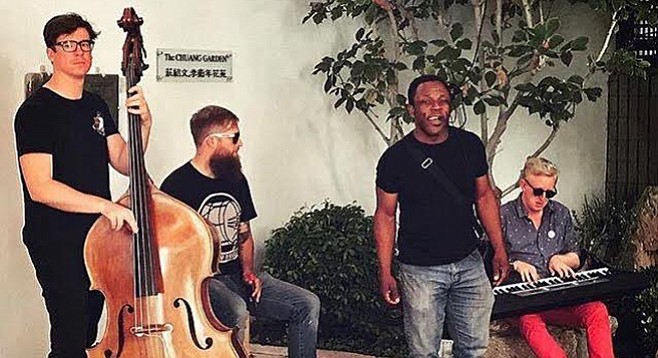 70 performances around town in 24 hours

“We actually broke the record with gig number 66 at Public Square Coffee House in La Mesa about 7:45 in the morning with two and a half hours to spare,” recalls vocalist Leonard Patton, whose group with Mack Leighton, Ed Kornhauser, and Matt Smith performed 70 mini-concerts in a 24-hour period, establishing a new Guinness Book record on August 9.

“I’ve never broken a record before — but it seems like you want to go a little bit beyond. We could have stopped at 66, but our goal was 70 and we hit that, which feels like even more of an accomplishment.”

Patton thinks their record is safe — for a while, at least.

“It won’t be impossible to break, but anyone who tries will have to really plan things out — it’s a little more involved than just calling 70 venues.”

Patton’s group made their first run at the record back in April, falling ten gigs shy of tying it. This time, he says, “We started meeting a few weeks after the first attempt, put together a great team, and we kept meeting every few weeks to strategize....

“One of our stops was Pal Joey’s in Chula Vista,” says Patton. “We got there and there’s a guy doing karaoke to an audience of about two people — he didn’t want to let us onstage to do our thing unless we bought drinks!”

Smith remembers another close call. “We were running late and the people at Rebecca’s in South Park wanted to close down. They started turning off the lights until [volunteer] Molly Whittaker ran in and shouted that we were right behind her!”

Kornhauser confesses: “I was nodding off while playing melodica towards the end. My keyboard collapsed right on beat one at one point. I also lost that same keyboard during the night.”

The group logged gig number 70 at Off Broadway Live in Santee at around 9:40 a.m.