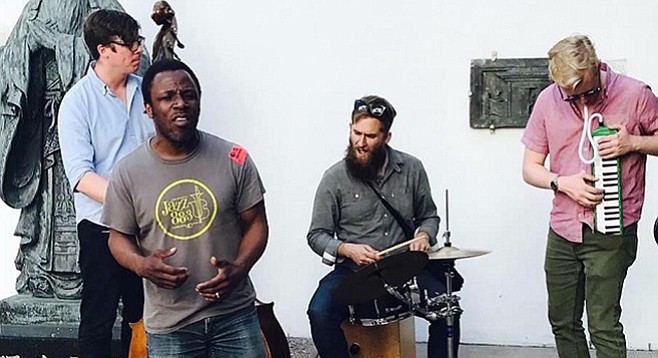 “We didn’t break the record on our first try, which was okay.”

The Guinness Book of World Records achievement for “Most Concerts in 24 Hours” (65 gigs set in Norway, 2012) is safe for now.

Local vocalist Leonard Patton and his group with pianist Ed Kornhauser, bassist Mack Leighton, and drummer Matt Smith made a valiant attempt at breaking that record on May 2, logging a total of 55 confirmed performances.

“We didn’t break the record on our first try, which was okay,” says Leonard. “Because we learned a lot and we are a lot more organized. Part of the problem was we were a little short in lining up venues for the after-midnight portion of the attempt [the contest began at 10 a.m.] so we had some down time in the early hours of the morning.”

Patton isn’t just seeking to break the record as an end to itself, “We’re doing this to benefit the Jazz Vocal Workshop. That’s a non-profit I started that goes into elementary, middle, and high schools to encourage kids to study vocal jazz. We are trying to offer scholarships, because I want to reach kids that wouldn’t be able to afford to study because their parents couldn’t afford the tuition.”

Patton’s group and a large cast of volunteers and witnesses are gearing up for another shot at the record on August 8.

“This time, we have a much better plan,” he said. “To fulfill the requirements, we needed to have two witnesses plus volunteer drivers. Last time, we traveled in separate cars and sometimes we had to wait on people who got delayed by traffic or parking. This time we’re renting a van that will hold everyone so that won’t be an issue. We’ll also have a web page that updates in real time so that our fans can keep up with where we’ll be next.”

The vocalist has one other improvement in mind.

“Sleep! The last time, some of us had gigs the night before, and I ended up working all through the previous night on the planning. This time we’re gonna be well rested and ready to do this thing!”