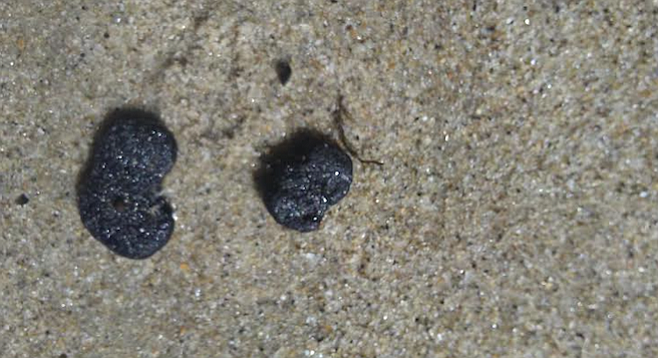 Ranging in size from a pebble to a quarter, sticky black tar balls have been washing ashore along the beaches in Ocean Beach since yesterday (March 30).

The balls are sticking to feet and have beachgoers wondering if there's been an oil-spill or tanker accident.

According to Travis Pritchard, interim executive director of San Diego Coastkeeper, “We don’t have those kind of ships carrying that type of crude, so if it was, it would be a sheen and not tar balls…. It's happened here before: last year we had them in La Jolla and Solana Beach and is most likely caused by natural seeps, either in our area or floating down from Santa Barbara, which has a lot more natural seeps than we do in San Diego."

Might just be a coincidence but I saw fresh tar on the beach at Torrey Pines today. Might be natural seep. Might not. Some were in the form of tar balls but others were wet-looking tar stains on the rocks.