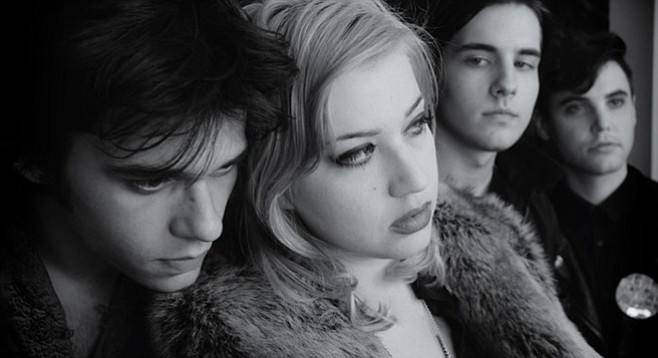 You are what you eat

...says Gateway Drugs, who have dad's "knack" for rock

When you think of family bands, groups such as the Osmonds, the Bee Gees, and the Jackson 5 come to mind. A young quartet from Los Angeles has emerged on the sibling band scene, though, and they have some serious rock roots planted in their DNA.

“One night we were talking and going over [band name] ideas and ‘gateway drug’ came about,” Gateway Drugs member Noa Niles tells the Reader.

The name fits the band well, even though their shoegazing output is a far cry from the polished power-pop that Noa’s father, Prescott Niles, delivered in the Knack. Prescott is also referred to as “dad” by Noa’s bandmates (and brother and sister) Gabe and Liv Niles. Being raised in a musical household served them well — all three are talented singers and players who switch vocal duties and instruments depending on the song they are tackling. After playing together and apart in a handful of other outfits, the trio added longtime buddy Blues Williams to solidify the group a couple years back.

The group has been lucky to tour with popular shoegaze groups Ride and Swervedriver. The latter will headline the bill at the Casbah on September 28. Unlike many of the old shoegaze guard, Gateway Drugs embrace the label.

“It’s a compliment. Most of the time we’re stuck staring at our shoes looking at the pedals. It’s good to hear that because we weren’t really trying to go for the shoegaze thing, it just kind of happened. It’s what we listened to. You are what you eat,” Noa said.

On a recent trip to San Diego, the band acted out their disdain of SeaWorld by participating in an act of civil disobedience. They took on the park patrons with water balloons.

“Some of us were luckier than others. Some of us had to kind of stay back and talk to a couple of people with little headsets and everything. But it was cool. It gave us something to do that day. Something to talk about when we went home. They’re cool. We all got out of SeaWorld alive,” Noa said.