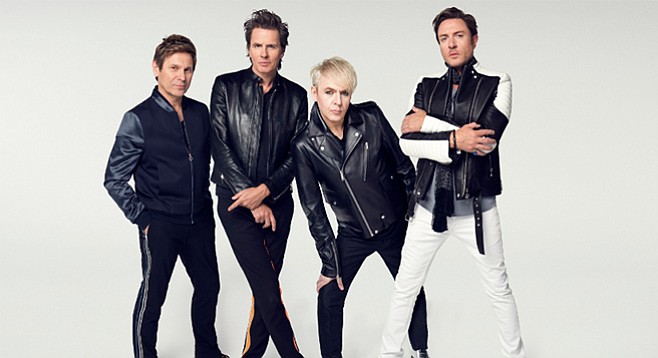 How the British pop band still records, tours without a dedicated guitarist

Duran Duran, still Duranimal after all these years, brings their new multimedia blitz and their new album, Paper Gods, to the Sleep Train Amphitheatre Tuesday, August 2. From his home near Hammersmith, London, drummer Roger Taylor took some telephone queries.

You learned to play from listening to records?

“My dad was a great believer that you could teach yourself anything, so I thought, I’ll be like my Dad, learn to play an instrument. I saw the Dave Brubeck Quartet playing on television, looked at the drummer and thought, Wow, that’s what I want to do.”

What were your favorite records to emulate?

“Yes was one of the first bands I loved. They always had great drummers: Bill Bruford and Alan White. Led Zeppelin...I was a big John Bonham fan. But John [Taylor, Duran Duran’s bassist, no relation] introduced me to Chic. I remember sitting in John’s bedroom, John saying ‘Check out this rhythm section.’ Bernard Edwards, Tony Thompson, and Nile Rodgers on the funky guitar. John said, ‘That’s how we’re gonna play.’ I said, ‘Really? Okay...’

“It’s amazing to have Nile producing on the last record, playing on it. He’s on the bill with us...playing with our idol. He’s very much part of the story, almost like another member of the band.”

Do you recall meeting him for the first time?

What were your impressions of a pre–“Like A Virgin” Madonna?

You cut Paper Gods without a dedicated guitar player in the group. Did you find that a struggle?

“No, we thought that was exciting, to have an empty chair, if you like, that someone could fill for each song. We had John Frusciante, we had Nile...Dom Brown played on some of the record. When you’ve been playing together a long time, it’s good to have energies that come and go.”

Which new cuts are you proudest of?

“We’re opening the show with ‘Paper Gods.’ We debated that for awhile, should we open with something pretty moody. It’s a deeper Duran Duran. ‘Last Night in the City,’ more in the EDM area. We’ve always been a dance band, and to me that’s a real dance record.”