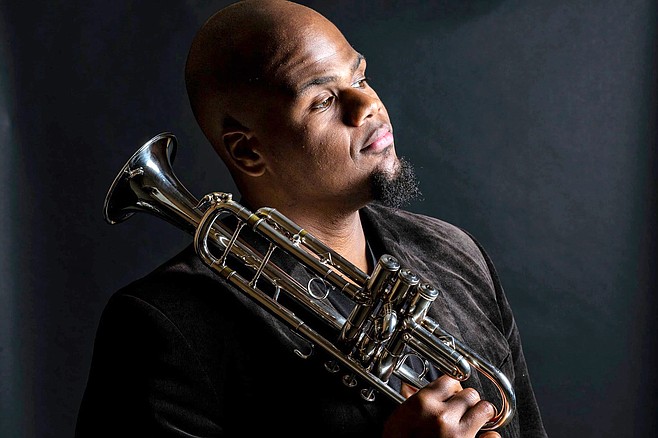 A Snapshot of Curtis Taylor

“I’m very much in a transitional time right now”

“I’ve got a nice crew with me and I’m excited we we’re able to put this album together,” says trumpeter Curtis Taylor about Snapshot, his latest record that dropped last month. Snapshot was recorded live and it features up-and-coming San Diego pianist Hugo Suarez alongside L.A. veterans Ben Shepherd on bass and Gene Coye on drums.

Taylor, an Ohio native, came to San Diego from New Jersey in 2014 with one primary motivation: to work with Kamau Kenyatta, who enlisted him to play on the Grammy-Award winning Gregory Porter album Liquid Spirit.

In the Spring of 2016, Taylor got hired as a professor/guest lecturer at Cal State San Marcos. I wanted to know what his goals were for his students.

“The music program there is pretty new, so I’m just trying to give them the basic skills they need. A lot of them come in not knowing much, with this being their first experience playing jazz, so I’m introducing them to a lot of new concepts.”

Does he miss home?

“I fly back to Ohio or the Midwest pretty regularly, so that’s not an issue. I do not miss New Jersey or New York. I don’t know if I feel like a San Diegan yet, but I love the community. Everyone has been really welcoming, and there’s a lot of transplants like me here, and we make a nice melting pot.”

The 34-year-old jazz man’s perspective recently changed dramatically when he became a father. Taylor’s son Khamari is less than a year old and he lives with his mom in Michigan, which explains the frequent flyer miles. “It’s hard, because I’m very much in a transitional time right now,” says Taylor. “Your entire life changes when you have a child — and I think about my son on a daily basis. I want to be there for him.”

In the meanwhile, Taylor is pleased with his new album, recorded live at the World Stage in L.A. “We did a one-week tour to promote it, and I would love to put 52 of those weeks together, man. There’s something to be said for the live experience — you just can’t duplicate that in the studio. Our music is improvisational — you could hear the same four cats play the same tune 10 times in a row, and each one would be different. That’s why the album is called Snapshot, it’s a sonic snapshot of that moment in time. This music should be experienced live, because the audience becomes a part of it, and if the audience is hip, you feel like you can do anything.”