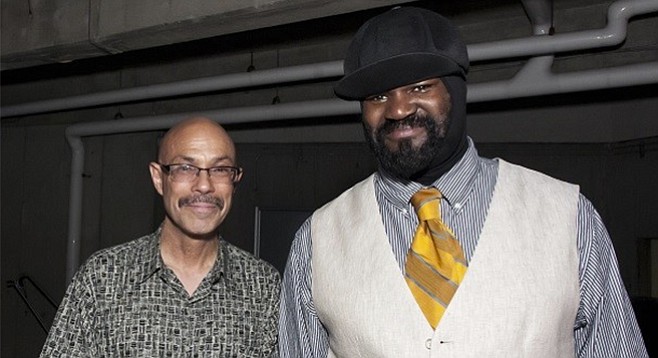 “I was at home working on a new project,” says musician/producer Kamau Kenyatta explaining why he had to miss this year’s Grammy awards. Kenyatta helmed the sessions behind Gregory Porter’s Take Me to the Alley, which earned top prize for “Best Jazz Vocal” at Sunday’s ceremony.

“I have some deadlines that I’m dealing with, and I’m going to New York in March for another project,” says Kenyatta. “So I’m just not in a position to take a day off. I had taken a lunch break and found out on Facebook that Gregory had won another one.”

"Take Me to the Alley"

Gregory Porter — one mic, one take

If you missed it on television, there’s a reason. “It was during the day because that’s when the jazz awards go out. They don’t get televised because the industry doesn’t put them on the same level as pop music,” Kenyatta continues.

“But it does feel wonderful because some really great musicians spend their whole careers without ever being nominated. We’ve been nominated four times and have won twice, so we’re batting .500.”

Despite frequent commitments in Los Angeles, New York, and beyond, Kenyatta has no plans to relocate. “It would take a lot to get me out of San Diego,” Kenyatta said. “Something drastic would have to happen, because I love it here and I love teaching at UCSD. It would require a seismic event to remove me. I have the freedom to do these projects in New York and I’ve been traveling to Korea to do some teaching at the Seoul Institute of the Arts. So I’m able to do that and still come home to San Diego — I don’t know what could be better than that!”

Kenyatta began the sessions for Porter’s new album in New York but complications set in. “We had intended to finish the vocals there but we were running so far behind schedule that we decided to wrap them up in L.A. at the historic Capitol Records Studio. So Gregory ended up in the same studio sitting on the same stool that Nat King Cole and Frank Sinatra sat on back in the ’50s. You know this is a special place for sure, you can feel it when you enter the building and walk into Studio A. They have some incredible black-and-white photos on the wall. You know you’re in serious company and need to be ready.”