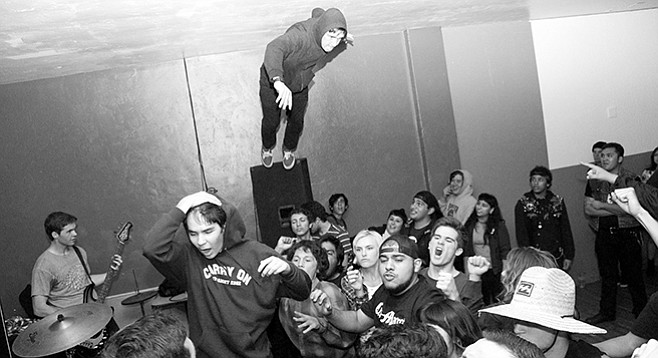 “We played at a local donut shop. It was an awesome show but it started to get wild,” says PSO drummer Zak Prescott about a show.

Lemon Grove Punks, or LGP, get aggro. But they are also responsible.

“We made enough at the door so we could all pay the bands and give the donut shop enough money to fix the hole. The owner invited us back and gave us free donuts.”

LGP is a friendly coalition of bands including PSO, Vital Oregon, Sustivity, NOK, and the Black Heads. Their fans are known to mosh, slam, and stage-dive.

Prescott says the LGP tradition started in the ’90s as a crew named 91945 (Lemon Grove’s zip code). “It’s a tight-knit scene motivated by people who like skateboarding and punk [music].” PSO’s video for “Wrong Board” “is a song about people who dress and talk like skaters but at the end of day ride a long board.”

But what about LGP’s reputation for throwing shows that can hurt?

“Our shows are not fueled by hate. The aggression comes from what people have to put up with each week at school, with jocks, or at work. Everyone is happy to get out and take out that aggression with their friends. If you look at our videos, everyone has big smiles.”

He says while La Mesa or Spring Valley punks don’t have a scene of their own, “They come to our shows. We all get along.... If one guy starts acting obnoxious, he does not have enough friends versus everyone else at that show who will settle things down.”

Prescott says PSO stands for Punk and Skateboard Overload — now, anyway. In the past it has stood for Punks Stand Outside, Pool and Spa Operators, Penis Shaped Octopus, Project Sell Out, and Prescott Secret Organization. “That’s our last name,” he says. Unlike the Ramones, all four surname-sharing members of PSO are real brothers, aged 18–24. Simon sings, Noah plays guitar, and Nate plays bass.

The three-year-old band wraps up a 17-city tour with an April 13 show at the Epicentre in Mira Mesa.

Prescott tells the Reader that hardcore punk is thriving.

“This is our third tour. Fresno is a great city for us. Chico is a small town with a great scene.... PSO isn’t the biggest band in the world, so all we ask for is a small guarantee. If not, we’ll split the door just to get us gas money.”