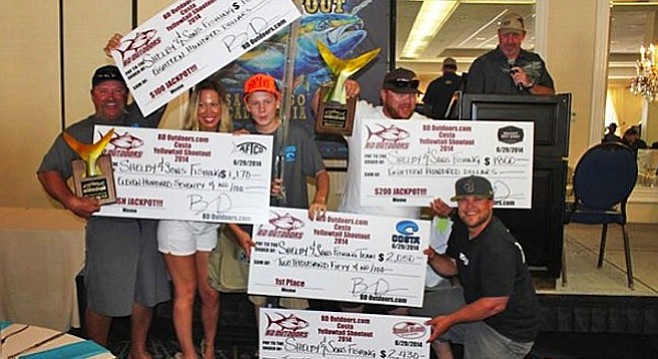 The most popular saltwater game fish caught in the San Diego area is yellowtail. Each week, anglers step aboard one of San Diego’s sport-fishing vessels in hopes of landing one. Usually abundant in migrating schools during the months from late spring through early autumn, yellowtail (known as “home-guards”) are also caught in San Diego winter months. If you have had jurel while traveling in Mexico or hamachi at a sushi bar, then you know the tasty yellowtail.

Beginning on Friday, June 26, with the mandatory “Captains Meeting” from 6:00 to 8:00 p.m. at the Kona Kai resort on Shelter Island Drive, the 2015 Bloodydecks Yellowtail Shootout promises to be action-packed.

The yellowtail bite is strong up and down the coast this year and there have been fish caught over 30 pounds. At 5:00 a.m. on Saturday morning it’s “lines in” and boats will scatter in search of the jacks.

Entry is $325 for three anglers, plus $100 per additional angler for up to a maximum of six anglers per team. Each team may weigh up to five fish. The heaviest combined three fish will determine the winners. There will be four optional side jackpots for largest fish and heaviest combined total.

Last year, first place was taken by Shelby and Sons fishing team with a total weight of 59.6 pounds. They were presented $2050 and sacks full of swag. Shelby and Sons walked away with all four jackpots.

Tournament boats may depart from Mission Bay, San Diego Bay, Oceanside Harbor, Dana Point Harbor, or Newport Harbor, though all fish must be weighed at an official tournament weigh station at either Dana Landing Fuel Dock in Mission Bay or Harbor Island West Fuel Dock in San Diego Bay. The tournament will culminate with the awards party at Kona Kai Resort from 11:00 a.m. to 3:00 p.m. on Sunday.