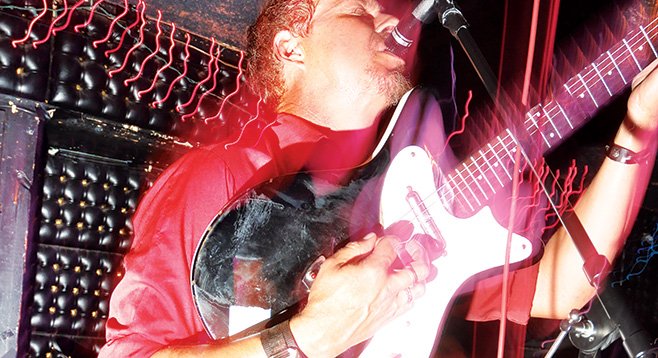 One instrument endemic to the genre is the Chapman Stick, an unwieldy multi-stringed monolith played by tapping the strings like piano keys, popularized on world stages by King Crimson and Peter Gabriel and championed locally by Tom Griesgraber.

Griesgraber’s recent wagon-train concept album Unnamed Lands, recorded with Bert Lams, has been featured heavily over the past few months on NPR’s show Echoes, hitting as high as number 7 in their top-25 ranking.

“Bert lives in Florida and tours consistently with California Guitar Trio, so we only get through San Diego as a duo maybe once or twice a year,” says Griesgraber, who’ll perform tracks from Unnamed Lands in concert with Lams on May 30 at the Museum of Making Music.

“They always do such an amazing job of promotion, and audiences are really great listeners there. But more than that, they recorded one of our previous shows, and it actually became a live album for us.”

The museum has long hosted proggy affairs, especially those saluting futuristic (albeit often vintage) sounds of sci-fi, such as A Night of Chapman Stick (featuring Griesgraber and Bob Culbertson), and Moog: The Man and the Machine (spotlighting the electronic keyboard pioneer).

Another of prog’s essential instruments, the oh-so-spacey Mellotron, has been showcased with film screenings such as Mellodrama: The Mellotron Movie, concerning the first musical keyboards to play the prerecorded sounds of other instruments. Local experimentalist Pea Hicks has been known to show up and demonstrate his own rare Optigan, a similar optical-based instrument manufactured by a subsidiary of Mattel in the early ’70s that forms the centerpiece of his band Optiganally Yours.

“I wondered if there is a wizard who lives deep inside the bowels of the Fleet Center who is the person behind the curtain and makes all the magic,” says Waters. “I imagined that he would be some sort of artistic super geek and that he and I would probably get along beautifully. I started poking around and came upon the content creator behind many wonderful shows at Fleet for many years, John Young, who has since joined [New West’s] board of directors.”

The Fleet’s recent Science of Rocks: Sounds & Stones featured a new installation called Guitar: The Instrument That Rocked the World, including one of the largest playable guitars, and their successful winter run of Rock in the Park concerts will be followed up this summer with acts to be announced.

If you like your prog crossed with punk, Dead as Dillinger will debut their Mad Man EP on April 25 at the Ken Club . “We’re a hybrid of a lot of different styles of music,” says singer/bassist Roman Terenzini. “I come from a punk background, guitarist Adrian Byers is a straight-up rock guy, and our drummer Matt Novack has a progressive and metal background.” Preview several songs from the new album on their Reader band page.

Weight of the Sun album release

Formed in 2013 and featuring former members of Chanauk, Weight of the Sun are premiering their debut full-length, Commons, May 22 at Amplified Aleworks (4150 Mission Boulevard #208, Pacific Beach, 858-270-5222). Produced at Back to Bassics Studio in Miramar with Matt Murphy (Periphery), the cover artwork was rendered by graphic artist Michael Jackson, who has also designed sleeves for Transfer and Rise AgainStreet.

Heavily influenced by Rush and Cream, prog power-trio Heavy Glow will drop their album Pearls & Swine and Everything Fine on June 4 at Soda Bar (3615 El Cajon Boulevard, City Heights, 619-255-7224). “This will be our first San Diego show in more than a year,” says singer/guitarist Jared Mullins. “We’ve been touring the U.S. for the past year and a half, [including] four tours with Black Pussy, Mothership, Buffalo Killers, and others.”

Humphreys by the Bay

As for the worldwide prog stage, many original stalwarts are still (or again) touring retro-friendly stages like Humphrey’s on the Bay. The 2014 roster is still shaping up, but so far the venue will host Roxy Music’s prog pioneer Bryan Ferry (April 17), one of the four or five guys behind rock’s first prog masterpieces, Ringo Starr (July 11); and the proggiest syncopated space rockers ever to run through a half hundred classically trained members, Yes (August 18).