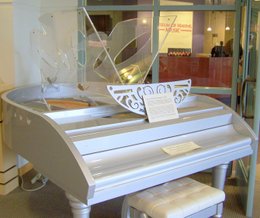 Before you can make music, you have to make the things that make music. Sure, you can sing, but unless you’re a chanting monk, it’s kind of nice to have some instrumental backup. The Museum of Making Music’s five permanent galleries trace the development of those instruments from the ’20s through the ’80s, when synthesizers made everything else irrelevant. Each gallery explores the popular musicians and innovations of the day, and the whole museum traces the history of the industry behind the recording industry.

At the entrance to the museum, learn about the relatively unknown role of the piano technician, discover the vintage and modern tools of their trade, and explore work that it takes to keep all types of pianos in top shape in Unseen Artists: Sights & Insights from the Piano Technicians Guild. You’ll also see three historic pianos from the 18th and 19th Centuries on loan from the Piano Technicians Guild Foundation’s Jack Wyatt Museum in Kansas City, KS. One of the pianos on display is the 1841 Chickering piano that belonged to the famous actress Laura Keene and was present in Ford’s Theater the night Lincoln was assassinated. This is one of the earliest upright pianos of modern design made in the United States. It is a hybrid of French, English, and American design elements. The strings are diagonal, as in many French pianos, while the action has the characteristically English over damper system (often referred to as “bird cage”). Its cast iron plate, however, was an American invention, which had not yet been adopted by European manufacturers. Runs February 14 through April 2018.