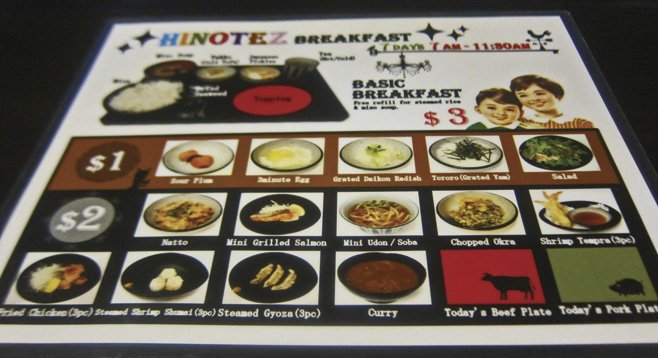 Most Important Meal of the Day

That’s what they call breakfast, right? But, honestly, most weekdays, I’m not very good at getting my day started off right. Our household does enjoy breakfast on weekends, and we always take note of what passes for breakfast when we travel: baleadas in Honduras, a huge calorie-bomb of ground meat, chorizo, mantequilla, eggs, and queso duro, served on a tire-sized flour tortilla smeared with black beans; the three to four different types of bread set on the table with other breakfast foods in Turkey; banh gio, minced pork stuffed in a rice-flour dumpling, then steamed in banana leaves, in Hanoi. There are also places like Athens, where a cup of coffee and a couple of cigarettes do the trick.

I was puzzled when the folks at Yakyudori opened up Hinotez last year: two shops about a mile from each other, each serving yakitori and ramen — it seemed counterintuitive. And while I’ve been less than pleased with lunch and dinner at Hinotez, I’ve been a fan of the Japanese-style breakfast served daily from 8:00–11: 30 a.m (these are new hours; until recently, they opened at 7:00).

The breakfast is built like a set. The base is rice, miso soup, tsukemono (pickles), chilled tofu, and nori (toasted seaweed). You then add items à la carte. An egg costs a buck, shrimp tempura is two bucks, and so forth. You can get double the gooey fun by ordering tororo (grated yam $1) and natto (fermented soybeans $2). It’s the latter that really takes me home.

I recall breakfast with my grandparents in the plantation town of Honolua on Maui. Both had worked in the fields picking pineapple, so rising before the sun was part of their lifestyle. They’d wake me up to pick papaya from one of the trees in the front yard. My reward was a steaming hot cup of coffee with tons of milk and sugar in it — I was only about seven or eight — and a steaming bowl of natto-tamago meshi. 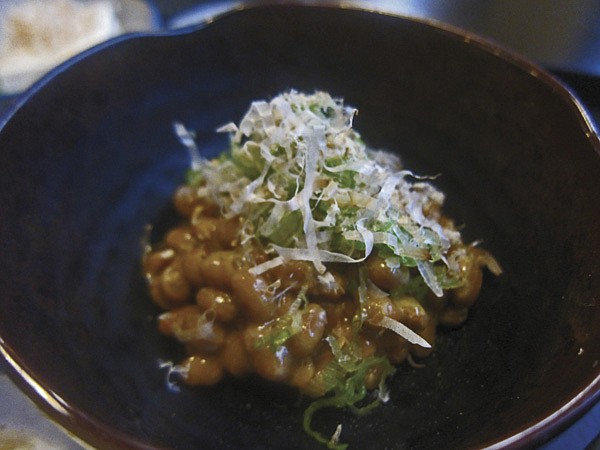 My grandparents were from Fukushima prefecture, famous for natto. Steaming hot rice was ladled into a chawan (tea bowl), and an egg was cracked over the hot rice, essentially cooking it. Natto, scallions, and soy sauce were mixed in for a healthy, nutritious meal.

At Hinotez, the style of egg is called onsen tamago, literally “hot spring eggs,” a technique where the egg is cooked at a temperature below boiling, causing the yolk to firm up before the white. Here, it more closely resembles a lightly poached egg swimming in a bit of sauce. It does fine over rice mixed with scallions and a dash or two of soy sauce. For around six bucks, you get free seconds of rice and miso soup. It does fill you up.

On the other end of the healthy spectrum is the Kaloko Moco from Island Style Cafe in Tierrasanta. What’s in a name? According to lore, the loco moco was created as a combination of hamburger patty, rice, and gravy at Lincoln Grill in the sleepy town of Hilo, Hawaii. Taking it a step further, Cafe 100, also in Hilo, added an egg — over easy, please — somewhere around 1949. There’s really no middle ground when it comes to the loco moco. You either love it or think of it as one of my self-described foodie friends does: “an abomination of tastes, textures, and calories.” But I was raised on it. 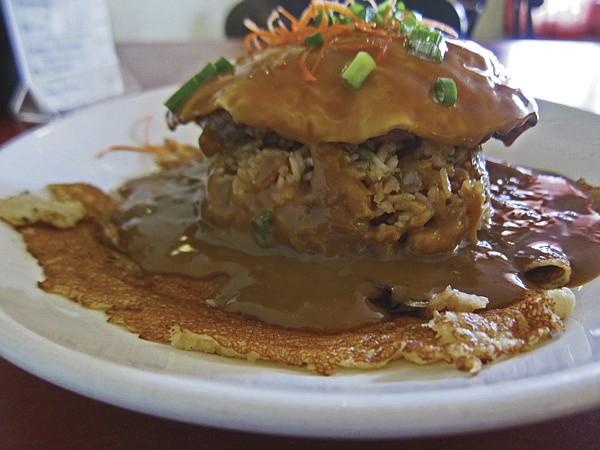 The version at Island Style Cafe could be described as an abomination by a loco purist, as it rests on a crepe! But I was soon won over. The slight sweetness of the crepe combines with salty “local-style fried rice” — medium-grain, Calrose-type rice with Spam and ham mixed in. The burger is char-grilled and lean, placing it at the tough end of the scale. It’s finished off with a coat of gravy and two eggs. Again, I prefer them over easy. I guess this would be the right time to insert this FDA warning:

Since I’ve gotten older and don’t do the physical work I used to do, I tend to limit my loco moco consumption to twice a year. Eating healthy does the body wonders; treating yourself once in a while does the same for your attitude. Both these places remind me of where I come from — and I never want to forget. ■