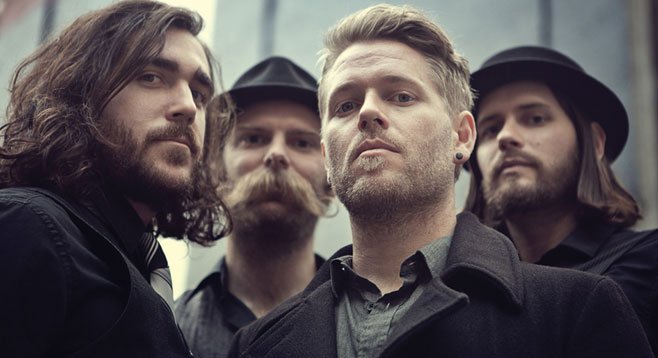 “My brother Josh and I started the Silent Comedy as sort of a side project,” says Jeremiah Zimmerman. “Sort of a lark.” They were both members of an aggressive punk band at the time. “But growing up, our parents listened to old folk music. We thought folk would be a fun thing to do on the side. We wrote some songs and thought we’d have a never-ending cast of side men.” But the punk band never took off, and in its absence they decided to go full time with Silent Comedy, which was at first completely acoustic. “Then it snowballed, and we got more energy and started plugging stuff in.” He describes the band now as a blues and rock-and-roll and folk hybrid with acoustic instruments plugged into amps. “It’s a weird tweak on that sound.”

For years the Casbah was a home-base for them. “But we also looked for non-traditional places,” says Jeremiah, which included booking a sold-out New Year’s Eve concert with Transfer at the Lafayette Hotel in North Park. “A lot of local bands don’t think along the lines of producing bigger events.”

Insight into the band’s love of the larger stage may be found in the Zimmerman brothers’ upbringing. “Our dad was a Pentecostal preacher.” They lived for a while in Huntington Beach, and then the family sold everything and moved to India, then Spain, then back to San Diego. “Our parents are hippie Pentecostals, the weirdest combination you could be.” Jeremiah says they grew up loving the drama of the church. “It was fun! People jumping up and down, going crazy, people singing together.” They thought they’d like to get that aspect of religious performance-art going in their own bar gigs. “We try to do some of that call-and-response thing with the crowd.” He calls their show a whiskey-fueled tent revival but with this caveat: “We’re not religious.”