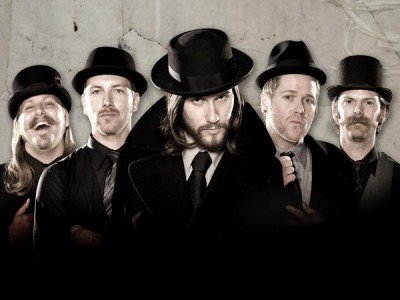 Get Fit with Silent Comedy

On January 14, members of folk-blues troupe the Silent Comedy posted a video on youtube.com/thesilentcomedy as they prepared for their tour with country singer and Academy Award–winning songwriter Ryan Bingham and his band the Dead Horses. The video, Fitness Series: Tour Prep, shows members doing their best Richard Simmons impersonations. Guitarist Tim Graves does bench-presses, a cigarette dangling from his mouth, and guitarist Justin Buchanan does curls with a bottle of beer.

Skits aside, the Silent Comedy has been getting ready since a booking agent approached them last November with the proposal of touring with Bingham. “It really was an immense amount of preparation,” writes bassist-singer Joshua Zimmerman hours before their first gig in Ventura on February 4.

“We’ve gone out on tour for several months at a time, but we’ve always had several day breaks in between. So, this will be the longest one that we’ve done straight through. Usually on our tours you can get away with blowing yourself out every night.”

On top of that, the 1920s cabaret-inspired buskers had to prepare to play large theaters instead of the small venues they are accustomed to. “Some aspects of our performance work really well in small clubs but won’t necessarily work in a theater with a 1000-person capacity. So, there is a whole different performance style that goes into that.”

Weeks before the tour began, the band had one final issue to work out — how to keep from freezing at night. They posted a message on their website asking if people in cities such as Denver, Boise, and Idaho could put the band up for the night. “We have a bed in the back of our van and another bed in the trailer. But, we can’t do that because of the weather,” writes Zimmerman. “The response from people in the cities has been incredible, even in towns that we haven’t been to yet.”