Movie Review: Moneyball, I Don't Know How She Does It, and Mysteries of Lisbon 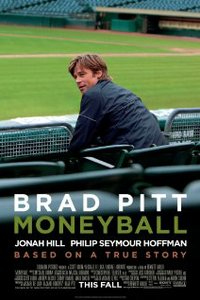 The one baseball game given serious time in Moneyball is the Sept. 4, 2002, showdown in Oakland. Over 55,000 fans saw the Athletics blow a huge lead over Kansas City, then win on Scott Hatteberg’s homer. It extended their great winning streak to 20 games, and is now the movie’s sweet spot.

But Moneyball is not sweet. Nor is it much about the mystique and glory, the fabled field of dreams. It sticks close to Oakland’s general manager Billy Beane, a former hot prospect (raised in San Diego) who bombed in the major leagues as a player.

Brad Pitt is at the top of his own game as Beane. Cocky and often nonchalant, he is gnawed by doubts that he tries to cover by grabbing a snack or pitching a grin. When the Yankees use a money pot three times the size of Oakland’s and hire away his star talents, Beane determines to change the system (his predecessor, Sandy Alderson, had begun this process).

He opts for “sabermetrics,” a heavily computerized way of analyzing players that overrides gut hunches and conventional wisdom. The resentment of this by agents and coaches, in meetings that are bull pens of male ego, is personified by skeptical team manager Art Howe (Philip Seymour Hoffman). The new approach is personified by Peter Brand, a young statistician based on metrics guru Bill James and Beane assistant Paul DePodesta.

As Brand, who has a portrait of Plato above his bed, Jonah Hill is virtually a Platonic form of soft, fat nerdiness. Hill’s reach beyond his comedy image rivals that of Albert Brooks in Drive. The crafty Brand sees that his system is much more than a numbers game as Beane hires, fires, inspires, and ramrods his players. Not very articulate, his temper often outruns his tact.

Baseball can have magic, as in Hatteberg’s homer. Moneyball says it is also a science and, ruthlessly, a business. Men are traded like well-paid slaves or simply sent away. The story’s bits of sugar come in the divorced Beane’s connection with his daughter (Kerris Dorsey), but this reveals an essential side of him.

The script went through many hands. The tiny appearance of Robin Wright as the girl’s mother feels like a fragment, a leftover. But director Bennett Miller is, true to form, a wizard of taste and observational nuance. He keeps a close focus on Beane and gives us a keen sense of why “moneyball” metrics have spread through baseball.

Miller has gone three times to the plate and scored each time: The Cruise (1998), a poetic elevation of the portrait documentary, starring New York dreamer Tim Levitch; Capote (2005), the most intelligently disturbing treatment of a major American writer, which won Hoffman an Oscar; and now Moneyball, a terrific, brainy sports movie. Not since Cobb, the 1994 Ty Cobb drama that could have been called Sourball, has baseball had such adulthood on screen.

Brad Pitt is so much more complex here than as the iron-butt dad in The Tree of Life. Surely some prime credit must go to Miller. The last shot of Beane, while driving, feels like a nod to Harry Dean Stanton’s poignant exit in Wim Wenders’s Paris, Texas. Given Miller’s kind of talent, such an echo would be understandable. 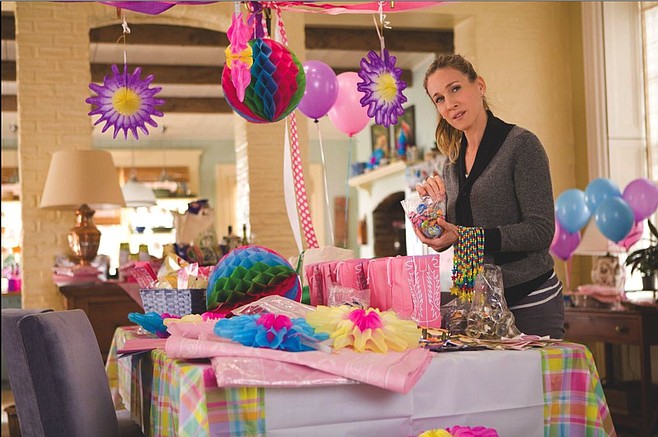 I Don’t Know How She Does It: A snack tray of zingers and fortune cookies.

The obvious but effective tactic of I Don’t Know How She Does It is to place Sarah Jessica Parker among younger and (let’s be plain) prettier women. Thin as an x-ray, she tirelessly outshines the other fems by drive, pluck, and a smile that could have cheered up Stalingrad during World War II. The SJP model for 2011 is named Kate Reddy, which evokes Helen Reddy, whose big song hit was “I Am Woman.”

Kate is a supermom and rising star of banking finance, a rather slippery hook for comedy in these mad-at-big-money times. While juggling two kids and a nicely accommodating hubby (Greg Kinnear), traveling frequently, eradicating lice, cooking, cell-phoning, emailing, PowerPointing, and teleconferencing, she also wows the rich but lonely wiz of biz, Jack Abelhammer (Pierce Brosnan), whose virile name leads to a suspensefully delayed penis joke.

Kate’s gal-pals mostly talk about her, with awe and praise and chuckling delight. Douglas McGrath directed as if taking brisk notes from Kate, who is always making lists. There are perky graphics, balloons, and parties. On a trip to Cleveland, Jack and Kate bond with regular, salt-of-life folk by bowling. Once banker Jack nails some strikes, they think he is fabulous (one can safely assume that Michael Moore was not a consultant for this picture).

The script is a snack tray of zingers and fortune cookies, like this one from Kate: “Having a two-year-old boy is like being a movie star in a world without critics.” Which is fairly amusing if you know that Allison Pearson, Welsh writer of the source novel, is married to New Yorker movie critic Anthony Lane. Her book has been altered into a shrine for SJP as a force of female nature, more engaging (if no less commercial) than in Sex and the City 2. 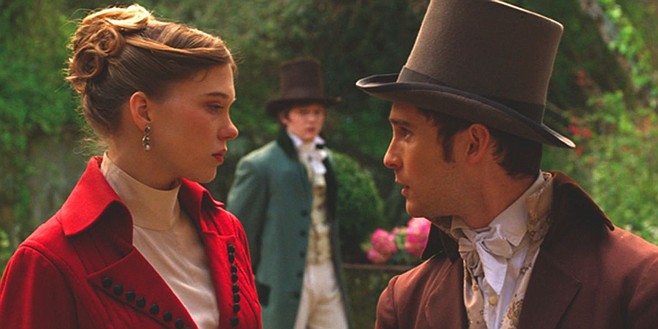 Raúl Ruiz, who died at 70 on Aug. 19, made over 100 movies. Some are lost, many were poorly distributed, and I have seen few. The Chilean-born, often TV-funded auteur was almost as driven by the muse of narrative abundance as Fernando Pessoa, Portugal’s titan of polyphonic prose. Ruiz was an experimenter who, as scholarly critic Jonathan Rosenbaum wrote, was able to “combine some aspect of the laboratory and the playpen.”

Mysteries of Lisbon has sustained power for 266 minutes, flowing like spun silk from the classic Portuguese novel by Camilo Castelo Branco (adapted by Ruiz and Carlos Saboga). At first daunting, the length becomes absorbing. I would willingly sit through the six-hour TV version, subtitles permitting. The trimmer edition is at the Ken Cinema, Sept. 23-29.

The axis of the plot (measly word) is the joined fate of a sensitive orphan and a supportive priest. In the 19th Century, the boy’s story is the starter for skillfully laced and layered stories and historical events. They revolve (as in Tolstoy, Stendhal, Flaubert) around the mystery of human character. Confusion is kept minimal by lucid acting, by serenely beautiful settings shot deep-focus in long takes, and by such blithe touches as a paper puppet theater and paintings that mutate. Old-fashioned succulence feels very freshly alive.

For years I have written about the San Diego Film Festival downtown, not expansively but with a desire to call some attention. I have attended sporadically. Packed screenings for local debut talents, James Woods vamping a crowd with his barn-burner personality, and William Shatner holding forth proudly for his small film, stand out in memory.

Founding director Robin Laatz, husband Karl Kozak (head programmer), and their devoted supporters have kept the event going. Their fest celebrates its tenth anniversary, Sept. 28 to Oct. 2. Most of it happens at the Reading Cinemas Gaslamp 15, at Fifth and G.

The usual down-take on the SDFF has been that it shows mostly indies and neophytes with faint commercial prospects and very few international or auteur works. Also, that it’s a party fiesta, bound to Gaslamp Quarter interests and the zeal to wine, dine, and shmooze (truth be told, that also factors heavily at Cannes, Telluride, Toronto, etc.).

Opening this year with 50/50, which opens commercially just two days later, the SDFF is dedicated to letting hopeful filmmakers find a screen and a responsive audience. It does so in an enjoyable, very San Diegan way. Before the spree (films, workshops, awards, panels, and parties) the site to visit is sdff.org.