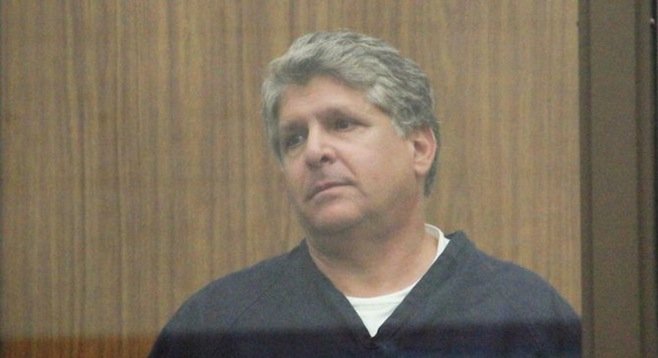 This afternoon a San Diego County Superior Court judge granted probation to Michael Theodore Pines, who was captured as a fugitive in Mexico last month.

Judge Kirkman went through the cases in which the defendant had pleaded guilty, and determined the sentence for each offense, and then ordered those sentences to run concurrently. Then the judge “stayed” all those sentences, and granted Pines probation. The result is that M. T. Pines could serve up to 3 years in prison if he violates probation – again.

Michael Theodore Pines, 60, could have been sentenced to 4 years and 8 months for offenses he admitted in his plea deals, according to court documents.

M.T. Pines was captured in Mexico and brought back by U.S. Marshals on October 19, 2012. He was a “failure to appear” for two court appearances in San Diego County in weeks prior, and a Superior Court judge issued a bench warrant. Since his capture in Mexico, Pines had been held without bail.

Prosecutor James Romo said today that the California Supreme Court officially disbarred Michael Theodore Pines on November 16, 2012. The much-arrested attorney was “involuntarily ordered inactive” by California’s State Bar more than a year ago. M.T. Pines has been in San Diego County courtrooms and jails many times over the past two years, with his own problems.

In his plea deals, M.T. Pines admitted making a written extortion threat, as a felony, and he has twice admitted practicing law while suspended from the State bar.

Okay, let's see; two "failure to appear" charges; felony written extortion; practicing law after disbarment; and the guy left the country and was apprehended in Mexico. If I, or anyone I know had been brought in on charges like this, I really doubt it would have resulted in simple probation. What a crock. These creeps sure do take care of their own.

Pines has been given MULTIPLE "opportunities to prove himself" and he has failed every single time, the last time he skipped the country. He should be in prison at this point, and if he were poor and black or hispanic, he would be.

You should call him up and see if he will do an interview, and ask how this has affected him and his practice- if at all.