“Mister Pines was arrested in Mexico, then extradited to the U.S. on our request,” said prosecutor James Romo.

The much-arrested and disbarred attorney Michael Theodore Pines failed to appear for two court hearings in a row, and two weeks ago a San Diego Superior Court judge ordered him arrested on a no-bail warrant.

The fugitive did not appear at hearings set on September 26 and again October 9.

Pines paid in advance for a month’s worth of rent, for the period October 15 through November 14, for a home in Mexico, according to prosecutor Romo. The fugitive was also house-hunting in Mexico for a home suitable for a long-term stay, according to Romo.

Jail records show that Michael Theodore Pines was captured by U.S. Marshals and booked into the downtown San Diego jail about 8 p.m. on October 19, 2012.

While in jail these past few days, Pines made phone calls in which he stated, “He was going to go to Mexico where no one could bother him,” the prosecutor told a judge, late yesterday.

Prosecutor Romo made these statements after Pines requested to be released again, in court yesterday, October 24, 2012.

Michael Theodore Pines, 60, could be sentenced to 4 years and 8 months for offenses he has already admitted, according to court documents.

Pines was “involuntarily ordered inactive” and disbarred by the California State Bar more than a year ago. He has been in San Diego County courtrooms and jails many times over the past two years, with his own problems.

Most recently Pines admitted making a written extortion threat, a felony. He also admitted practicing law while suspended from the State bar – an offense he had already pleaded guilty to, earlier.

Prosecutor James Romo said that Pines continues to advertise his services as an attorney, even while a fugitive.

After his most recent guilty plea, August 28, 2012, Pines was released on condition that he wear electronic monitoring and “receive appropriate medical attention at appropriate facility.” His mental competency continues to be questioned by judges who see him.

In past, Pines publicly positioned himself as a champion of persons in danger of losing their homes, and he spoke of conspiracies involving banks and people in power. 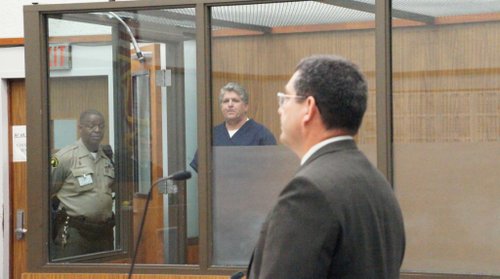