The much-arrested and disbarred attorney Michael Theodore Pines, 60, was released from custody last week after he made another felony plea deal.

In his most recent case, Michael Theodore Pines admitted making a written extortion attempt and practicing law while suspended by the California State Bar, both as felonies. He also admitted misdemeanor trespass. These three offenses occurred between July 20 and July 26 of this year, according to court paperwork.

Pines was free on his own recognizance at the time. He pled guilty just the month before, in June, to felony stalking of one named victim, plus disturbing the peace of another named victim in violation of court order, plus resisting arrest; three separate prior incidents.

From court hearings, it appears Pines’ most recent felonious actions are in connection with a person who was in bankruptcy proceedings. This man owned an estate in Rancho Santa Fe — a posh area of San Diego County — and Pines first claimed he was acting as a concerned citizen and not as an attorney for the man. This man in financial distress appeared to believe it was not possible for him to be a trespasser on his own property, although bankruptcy trustees testified that he needed their permission to enter the property after it became controlled by them and the courts. People who were staying at the Rancho Santa Fe property are the alleged victims of Pines’ emailed extortion attempts.

Prosecutor James Romo submitted to the court copies of emails he said were from Michael Theodore Pines, these emails demanded hundreds of thousands of dollars from a man and his wife who lived at the estate; Pines gave a deadline for payment of the money, and in exchange he would not demand their arrest and expose their illegal activities which he mysteriously alleged.

In past court appearances, Pines’ mental competency has been questioned. Sometimes Pines has attempted to represent himself in court, and sometimes he has had legal representation. Court documents suggest that Pines threatens legal action against attorneys who represent him but then disappoint him.

The San Diego District Attorney’s office and authorities in Orange County and Arizona have all struggled with Michael Theodore Pines, according to statements made in court and published accounts.

Pines appears to position himself as a champion of persons who are in danger of losing their homes, he speaks of conspiracies involving banks and people in position of authority. In past, the unusual attorney has invited television news cameras to follow him while he assisted clients trying to get back into their foreclosed homes, Pines even arranged a locksmith to open a front door in at least one case.

According to court paperwork, Pines could get as much as 4 years and 8 months in custody for his current list of admitted offenses. His sentencing is scheduled for September 26 in San Diego’s North County Superior Courthouse.

In the meantime, Michael Theodore Pines is free again on his own recognizance. Superior Court Judge K. Michael Kirkman ordered Pines to report to probation and wear electronic monitoring and “to receive appropriate medical attention at appropriate facility” while he awaits sentencing.

There appears to be another attorney named Michael Pines who practices law in San Diego County, this other attorney practices personal injury law out of his La Jolla offices, and struggles with the strange publicity of the other man named Pines. 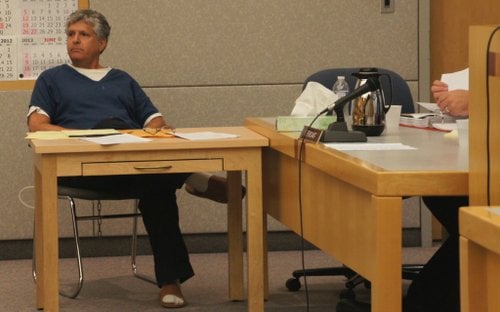 Editor's note: There are 2 attorneys named Michael Pines, the other is a personal injury attorney in La Jolla.

What is it with the Reader and character assassination articles? And why this guy? Who is he? How does this matter to society at large?

This used to be referred to as "yellow journalism."

Actually, this guy is fighting the illegal seizure of homes by corrupt banks/lenders. Even IF the law is on his side the system will take him down and call him crazy. As to your first point the Reader has a "point of view". Do some research on the owner.

Pines appears to position himself as a champion of persons who are in danger of losing their homes, he speaks of conspiracies involving banks and people in position of authority

Ever hear of Robo signing and a million other bank abuses???? Pines is correct on this issue for sure.

In the meantime, Michael Theodore Pines is free again on his own recognizance

The San Diego Superior Court really deos have a bunch of yahoo judges on it. Bail is to make sure people 1) appear for trial and 2) to keep the public safe. What has happened between now and when Pines was re-arrested and had a million dollar bail?? NOTHING. So why was his bail set so high, why was bail set at all????? If they are now OR'ing him.

The judges are yahoos, they do whatever the DA/DDA tells them to do.

I have a feeling he is not going to be sentenced to anymore custody.

That is usually the case because they regard everyone guilty as soon as they step in to court.

Bail is the only part of the charging process where a person is considered guilty, but the County has a set schedule for all offenses, and the bail for this guy was pretty high- way ABOVE the scheduled amount (which in SD County is twice what most counties set), so anyway, why did they OR him now??? Why now vs. months ago when he was re-arrested??? Answer that one.