Representatives from Kilroy Realty have gone out of their way to gain support from Carmel Valley residents for their 1,857,440 square-square foot development project One Paseo, Carmel Valley's largest development to date.

But residents have come out against the project, saying the project would create too many negative impacts for their community. They started a website, written op-eds in local papers such as the Del Mar Times, and have attended community meetings where they voiced their concerns.

In response, Kilroy has pledged to work with the local residents. The development company hosted community outreach events, met with community members, and they even hired former Director of Development Services Marcela Escobar-Eck to serve as a consultant on the project.

Another thing the top executives at Kilroy have done is donate $2,499.22 to district 1 council member Sherri Lightner's campaign for reelection.

The donations have some residents worried. "The [draft environmental impact report] reveals significant and unmitigable impacts on traffic and community character in Carmel Valley," writes Carmel Valley resident William Bibb in an email. "Sherri Lightner should not be swayed by Kilroy's lobbying and its campaign contributions to approve this project against the vast majority of residents' wishes. Rather, she should demand a reasonable alternative plan that will not destroy the quality of life in Carmel Valley and is consistent with the community plan...It is disappointing that Sherri would accept money from people with business before her office."

I am waiting to hear back from Lightner's campaign about these donations. 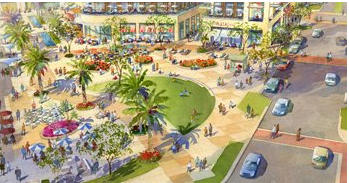 I am a Carmel Valley resident who's opposed to One Paseo.

Wondering about all those nice pro-One Paseo articles that keep appearing in the local news? Read this article by the late Molly Ivins that quotes John Davies on the type of PR tactics they practice, including generating fake grassroots support (aka astroturf): http://community.seattletimes.nwsource.com/archive/?date=19950717&slug=2131762

And just to be thorough, here's the proof that Davies Public Affairs is working for Kilroy on the One Paseo project (scroll down to the Davies award for "A main street for Carmel Valley":

Marcela Escobar-Eck is also on the Board of Directors of Move San Diego, which gave Kilroy a "Smart Growth" award for One Paseo, arguing that this level of density is sustainable due to a single bus line in the 2050 SANDAG transportation plan (see the DEIR's for the project at whatpricemainstreet.com).

Btw, this project project includes 600 condos, 8 and 10-story office buildings, a 3 to 7 level parking structure, a 150 room hotel, retail area comparable to what's already in Del Mar Highlands Shopping Center, and a tiny pocket of heavily advertised (you even include the Davies Public Affairs rendering above, which was in a pricey booklet mailed to every Carmel Valley resident in 2010) community space in the 23-acre lot at the corner or Del Mar Heights and El Camino Real. That’s a lot—2 million square feet of development—to fit into approximately the same acreage as Carmel Valley Middle School or the CV Rec Center. One Paseo, by Kilroy’s own estimate will add 27,000+ additional cars per day to the neighborhood. Anyone who already suffers through the I-5 merge or Hwy 56 during peak traffic should be paying attention to this project; if it goes forward, both of these will become much, much worse.

Having experienced the traffic congestion in that area a few times, all I can say is "Enough!"

This whole project doesn't smell right, and I can't believe how gullible people are to fall for Kilroy's/Davies's PR tactics. I live in Del Mar Heights, and we're going to be as affected by this development as Carmel Valley is, yet we're not even considered in the DEIR. Nor are neighborhoods within a two-mile (maybe three-mile) radius, which are also going to be significantly--and negatively--impacted. We use the shopping centers and other amenities in Carmel Valley all the time; we use the same freeway onramps and exits. Traffic is already a nightmare during the fair and racing season, and this monstrosity, as the previous comment notes, will add significantly more traffic every single day. And what will happen when people can't get on the freeway at Del Mar Heights? They'll head for the coast, as they do now, backing up traffic on Del Mar Heights and Camino Del Mar.

The DEIR also makes no mention of plans to widen I-5, and what effect that will have on traffic in the area, along with the impacts of One Paseo.

The decision to limit the DEIR's scope to the very small area just around the development seems deliberate and duplicitous. This a project with regional implications, and to imply otherwise is simply dishonest, maybe worse.

San Diego has a long, appalling history of rubber-stamping inappropriate development projects without any regard for the infrastructure to support them--in this case, roads and transportation. (Read a book called Under the Perfect Sun for more info on that.) If One Paseo is allowed to go through as proposed, it will be yet one more black mark against a city council that cares more about campaign (and possibly other) contributions than it does about the interests of the people its members were elected to represent. Why not put something of this scale out along the 56, where there is adequate land and where there's an opportunity to put in enough roads, and limit development on the One Paseo property to the 500,000 square feet it is zoned for (which will also have an effect on local traffic, only not as much)?

I voted for Lightner last time, but she's lost my vote. This is unconscionable.

It certainly looks like our City Council Representative has sold us out. When I asked the Carmel Valley representative where she stood on the One Paseo proposal, I got the usual weasel words politicians use when they want to avoid taking a position. Since Sherri Lightner has accepted all these "donations", she needs to prove the developer has not bought her vote.

The City Council opposing candidate has also taken this developer's money. Everyone (except the Supreme Court) knows money corrupts. I asked him a few times for a definitive statement about his position on One Paseo and only got the usual weasel words from him.

I also talked to our City Council Representative a few more times and I feel she will vote against this development if the Planning Board recommends against it. So it is up to we the people to let our voices be heard.

Regarding the bogus "Smart Growth" award: There is nothing smart about this growth but the award ploy is clever. They have created an organization that appears to be environmentally based and packed it full of pro-development hacks. Then they give out awards to their clients under the banner of smart growth.

The award also provides cover for politicians who have sold their vote. They can point to the award as a reason for voting against the interests of their constituents.

Sign the petition against the One Paseo project: https://www.change.org/petitions/san-diego-stop-one-paseo-it-s-too-big-for-carmel-valley