View From the Press Box

It was evident Tuesday evening that even though it was to be the first game of professional baseball played inside of Petco Park in 2012, the big day was set to be on Thursday. The decorative field images near the batter's circles and behind home plate normally associated with opening day were simply marked as vague dotted reminders of what was still to come. And as the sparse crowd filed in it was apparent that regardless the great care taken by the crew chalking the foul lines, Tuesday was still only an exhibition game.

Bud Black was loose and accommodating in his pregame dugout meeting with media. But rather than to field questions concerning the exhibition game to be played that evening against the Kansas City Royals, Black instead found himself answering queries regarding Thursday's opening day starter Edinson Volquez.

"You should pitch with the same mind set, no matter where you are, and that is to attack, throw strikes, locate your fastball," Black said in reference to the move by Volquez from a hitter's park last year and a pitcher's park as Petco is known as. "He knows the difference between here and Cincinnati."

There was also a lot that Bud Black had to say about the difference between last year's Padres team and the one that will likely take the field on opening day and possibly even pitch in relief. Aside from Carlos Quentin who is injured and expected to return in May, Yonder Alonso, starting pitcher Volquez, reliever Andrew Cashner, and closer Huston Street are new additions in as much as however the later two are needed on Thursday.

But once back up in the press box watching the game begin, it didn't so much appear on the field that the Padres and the Royals were throwing a mix of prospects out there with a few players that would obviously be on the 25-man roster when the season begins to count for real. It looked like two teams that were fielding their best players, and those players seemed to be playing as though the game counted for something. It felt like spring training had ended watching Clayton Richard set the first three batters down in order.

The view from the press box appeared as though it was more about winning the game than making the team.

Clayton Richard pitched a masterful 6 innings on Tuesday, throwing only 75 pitches in 6 innings of work. Richard allowed only 3 hits and no walks while striking out five. He held his pitch count especially low in the first four innings of work, pitching to contact and staying ahead of the count on the Royals offense, which leads the league in batting average in the 2012 preseason.

Luke Gregerson struck out the 2 batters he faced in the seventh, while the only run was scored after left handed reliever Joe Thatcher was then brought in and switch hitter Brayan Pena stepped in batting right handed hit a home run. Thatcher then struck out left handed hitting Chris Getz to end the seventh. Andrew Cashner allowed a sharp single and then impressively struck out the side in the eighth inning with a great command of varying speeds, from a fastball that approached 100 MPH to a slider that never hit ninety. Huston Street threw a perfect 9th inning for the save.

Offensively, the Padres got to Royals starter Johnathan Sanchez in the third inning when Chase Headley and Jesus Guzman hit back-to-back solo home runs. Nick Hundley was 2 for 3 and Jason Bartlett, Orlando Hudson, Yonder Alonso, and Will Venable each got a single to round out the Padres 8-hit attack. Venable also stole his 8th base of the spring. 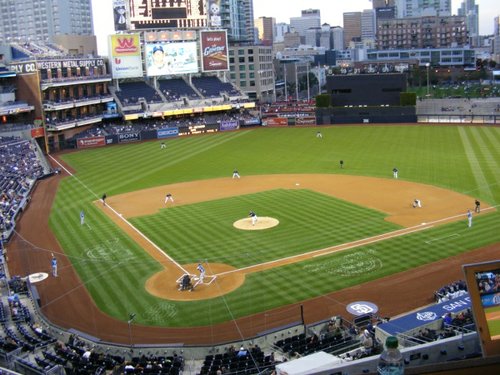 (Image: First pitch of Tuesday's exhibition game between the San Diego Padres and the Kansas City Royals, from the press box)

Manager Bud Black along with G.M. Josh Byrnes announced after the game on Tuesday, the roster had officially been trimmed and that the battles for spots were over. Jeremy Hermida will be on that roster, while Andy Parrino beat out Everth Cabrera and reliever Brad Brach would be sent down while reliever Micah Owings made the squad. A more detailed report will be made available later, as Black indicated that ailing reserve outfielder Mark Kotsay would need further evaluation in order to determine if he would be placed on the disabled list are not. Another final move might have yet to be made if this occurs.

Wednesday, both the Padres and Royals will travel up to Lake Elsinore and play their final game of exhibition ball, first pitch is scheduled to happen at 2:05 PM. The Padres figure to be fielding and pitching a lot of minor league talent there, giving the starters in the big club most of the afternoon off to rest. The game will not be televised but can be heard on radio 1700 AM.