Hauling up Cedar out of Little Italy, past the Pioneer Hook and Ladder – hey, didn’t that use to be the firehouse museum? - and crossing Columbia when whack! 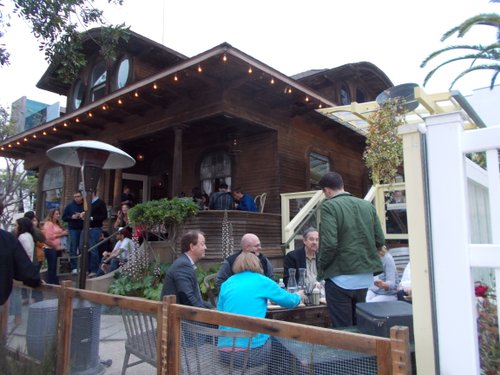 But now, lookee here! This is six at night, and the newly planted garden is bustling with people, sitting at tables, eating, drinking…an old-old washing machine is stacked with coals and burning like a tableside fire pit. 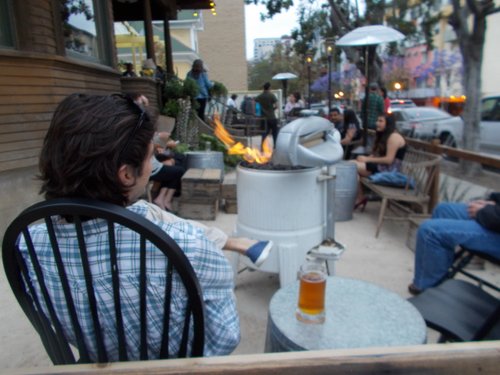 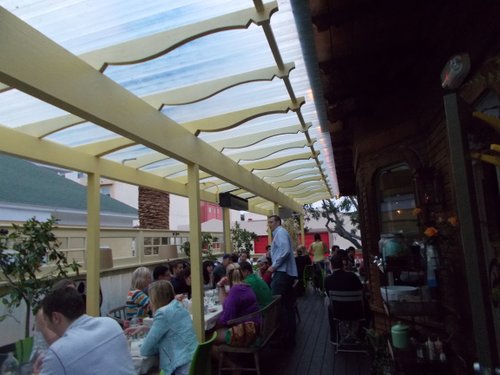 “Queenstown,” says the gold lettering on the window. 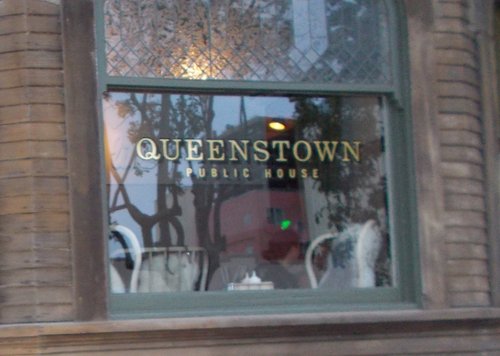 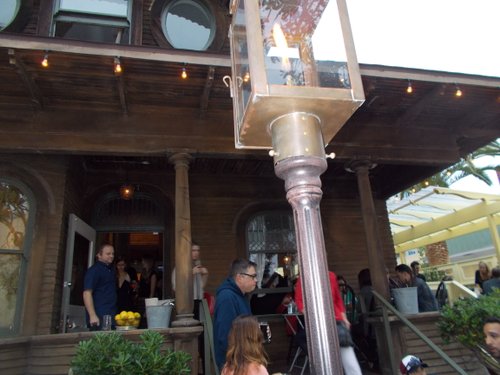 ...and into this crowded room with a bar on the left with a backboard that goes right up to the second level. An Indian-style canoe hangs down the wall. So cool. 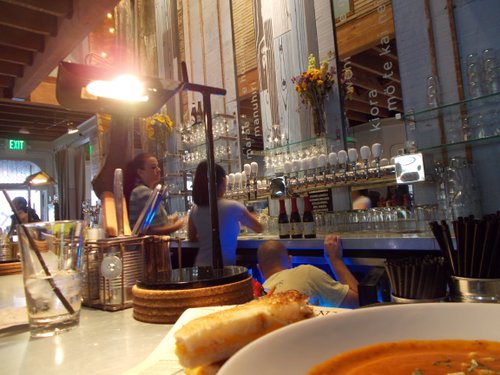 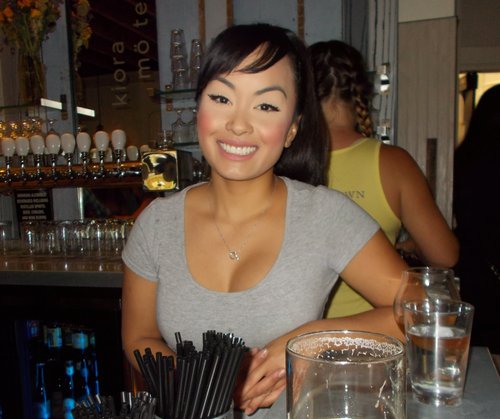 Gosh. Just missed happy hour. But I get a nice dark beer, a Port Brown, for $6, and check the menu.

First thing I think is: these people are going for the Craft and Commerce crowd. Same vibe, same simple-but-not-that-cheap fare. Oh, I’m seeing what looks like New Zealand Maori words etched on the backboard mirrors. I knew these guys renovating this house were part of the Bare Back Grill gang. So bottom line, you know they’re going to deliver Kiwi-style grass-fed beef, and organic everything, because that’s what their rep. is based on. Nice to know. But it costs. Like, a kinda lamburger goes for $13. The “Sheila’s Cracked” burger with fried egg is eleven.

D’ah… Talk to Todd and Jennifer, on stools next door. 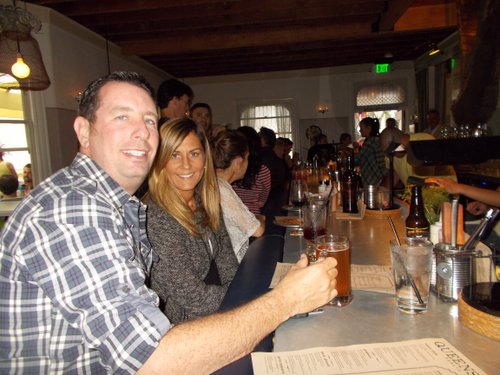 He’s just getting his “Queenstown Favorite” burger ($10), and it does look wicked. Big patty with edam cheese all crumbled on top. She just has the mixed greens salad, with strawbs and pine nuts ($8). Looks great. Plus they have a bowl of sweet potato fries with blue cheese crumbles on top ($3.50 for the small, $6 for the large) 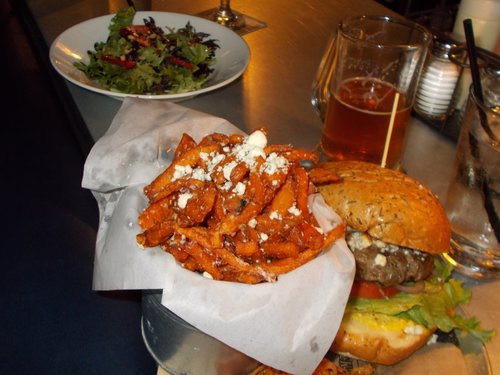 Chris, one of the rushed-off-feet waiters, brings out a giant pretzel on a plate with jalapeño cheese and mustard for somebody nearby.

But that’s $9. Think I’ll get more with the soup and sammie. 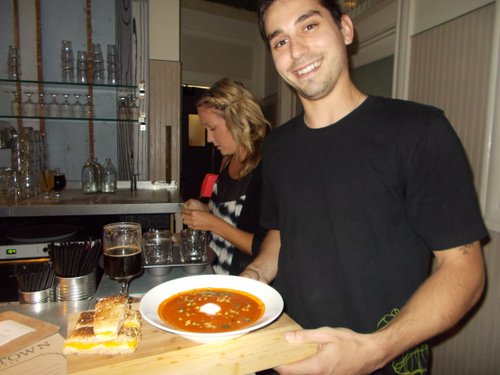 ...and it slurps down great, sour cream in the middle, with plenty of liquid to dunk the crustless cheese sammies in. 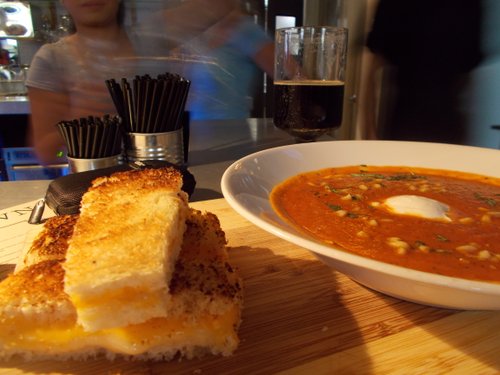 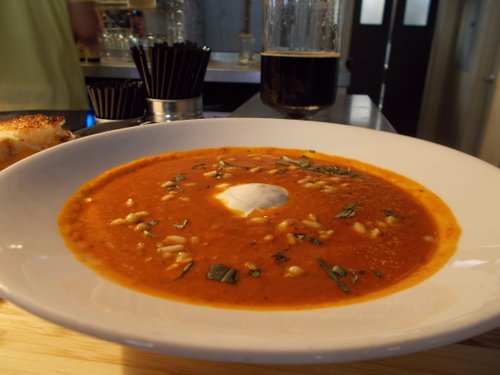 Love the atmos. Turns out the house has been here since 1905. 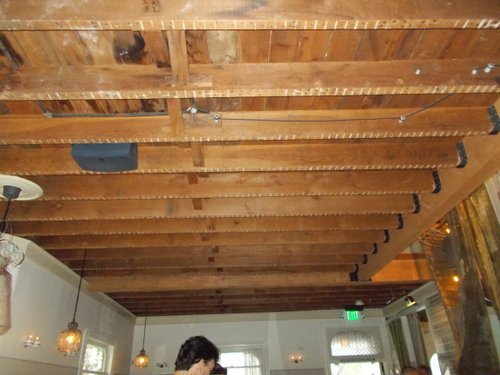 “Any stories about it?” I ask Angeline.

“Well, there’s the ghost, named Wanda…” she says confidentially, just before she whips off to a crowd of new customers. 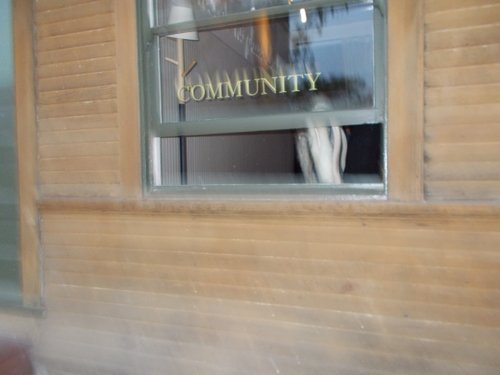 Could this be the ghost named Wanda, just behind the window...?

Now I’ve gotta come back. With Carla. She’s the Ghostbuster around our house.