Cafe Virtuoso spills the beans on why organic, why Fair Trade

Who is the greenest coffee roaster in San Diego? 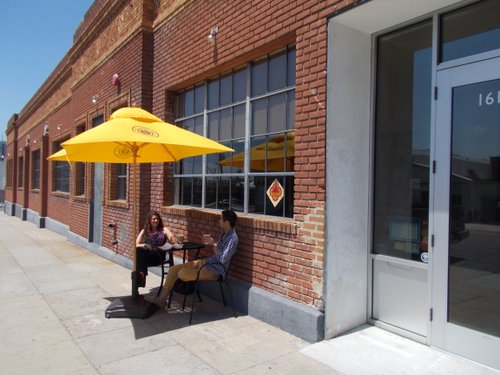 Why? Because they claim to be the only 100 percent organic coffee roasters company in town. And I haven’t heard anyone challenge that. (Others certainly come close, but aren’t ready to give up interesting coffees like mocha coffees from Yemen, and Blue Mountain coffee from Jamaica, which can’t claim to be totally organic).

Besides, I happen to be here, passing by their brick building and their one outside table and yellow umbrella.

“Advancing Civilization One Bean At a Time,” it says. 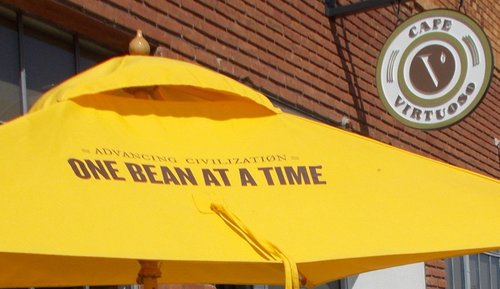 I go in and get a cup of their “Virtuoso blend." Costs a couple Washingtons. Lovely, smooth. Blend of Central American, South American and Indonesian beans. Guess this blending and the roasting is where skill comes in.

“If you compare coffee to wine,” says Stephan vonKolkow, one of Virtuoso’s founders, “wine has around 150 flavor compounds. Coffee has 5-600. It has incredible variety.”

So why go organic?

“Just because it feels right. You certainly pay more. We pay $2 per pound or more for all our coffees, plus 50 cents a pound more for coffee that’s officially fair trade. And that $2 and 50 cents does get back to the farmer, not some middleman.”

Been thinking about this since I heard Saturday was World Fair Trade Day. I’d always heard how coffee growers are usually royally screwed by middlemen in the coffee trade. And forced to grow coffee in mono-crop open fields drenched in pesticides and fertilizer, under the punishing plant-growth-forcing sun.

This as opposed to going the slower, more sustainable way of mixing coffee plants with other crops and growing them in the shade of trees, and with no poisons sprayed on them. Coffee’s better, growers and their kids are healthier, the hillsides don’t look like they’d just been rained on by Agent Orange, and we don’t have to wonder how much pesticide we’re downing with each gulp.

But growing coffee plants in the shade can cut their output. “It can drop down to maybe 1/3rd of what [sun-forced, nitrogen-fed] plants produce – at first,” Steve says. “Some research says that’s partly because the coffee plants have become addicted to huge amounts of nitrogen fertilizer. But the plants can be weaned, and then bounce back to 100 percent of their former production in maybe 5-7 years, if they are really well taken care of.”

And then there’s the Silent Spring effect. Pesticides kill all of the bugs, but also the birds, by a combo of poison and starvation. “With shade-grown organic, you need a variety of plants and trees, and you'll get bugs. So you need the birds to feed on the bugs that want your beans. Which is good. Life comes back.”

“And you give people life, too,” says Laurie Britton, another partner. “Our latest is from a cooperative of women from Lake Kivu in the Congo in Africa. Six hundred of them are growing certified organic, fair trade coffee. Beautiful coffee. They can't grow enough for the demand.”

Why women? “Because so many of the men have been killed in their civil wars in the region, like Rwanda. The coffee is being largely grown by their widows.”

I drain my cup. Look at it for a moment.

I tell you: a story in every organic sip. 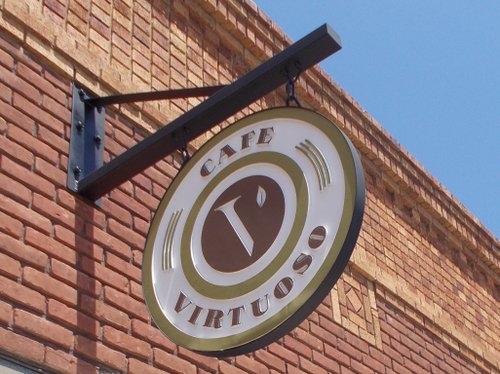