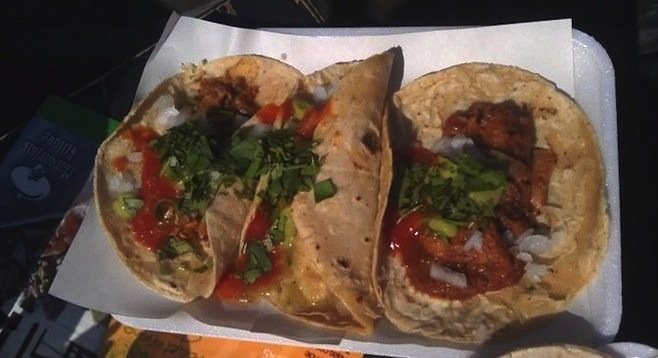 Tijuana’s Vegetarian Cuisine and Arts Fair returns for its third bi-annual installment on Saturday, September 7 with over 15 vendors from Ensenada to Orange County.

As always, organizers Polen have curated a tasty lineup of local artists to perform while you munch on cauliflower ceviche tostadas, Portobello “fish” tacos, and seitan adobada.

The solo project of Xavi Villaplana from Sixties Guns, Warm Places dips your toes in tropical nu-disco with a dark side.

Guaycura Sounds (pronounced “goo-i-koo-ra”) will ignite Saint Elmo’s Fire in the nostalgia synapses of anybody who came of age listening to mid-to-late-‘90s post-hardcore and instrumental math rock.

I WILL NOT GO TO TJ TO EAT A MEAL! Seems dangerous.

If you want a cheap ride out to Zona Rio from Centro de Tijuana (downtown), go to the corner of Calle Sexta and Avenida Constitucion, the southwest corner. There are green and white cabs (advertising their ultimate destination as Lomas Verdes, which is WAY beyond Zona Rio) which go through Zona Rio via Sanchez Taboada. Less than a dollar each way. $ Bargain. You'll share the cab with others, but you can't beat the price.

Food was awesome, people were super friendly and it was safe! Can't wait for the next one.