Stylistic changes to the menu at Leroy’s Kitchen (1015 Orange Avenue, Coronado, 619-437-6087) reflect the addition of a new chef in the kitchen. JC Colon, formerly of the Kensington Grill, joined Leroy’s earlier this year. Before, the kitchen was hung up over getting the most mileage out of a vague sense of Southern hospitality. It never worked like they wanted, especially not in downtown Coronado, and the restaurant suffered a culinary identity crisis. Colon’s new menu, while much more pedestrian in intent, is actually a stronger overall presentation of the kitchen’s capabilities.

The Bavarian pretzel ($6 from the San Diego Pretzel Company) fortunately remains on the menu. They are, seriously, so good. A chilled corn soup ($8), dressed with chili oil and corn shoots, was nothing this town hasn’t seen before, but made for a much needed lightness on the formerly heavy, salty menu. 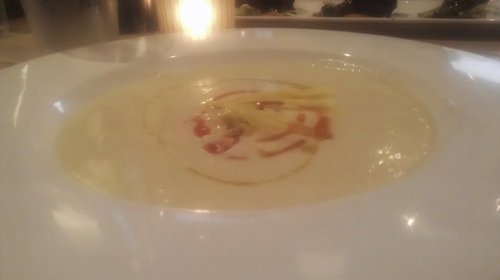 “Chinese chicken lollipops” ($11) is a cutesy way to describe chicken legs glazed in a superbly umami barbecue sauce. Three, diminutive lollipops for $11 was a bit of a stretch, but Leroy’s has grown into post-recession confidence and the prices have crept upwards since the restaurant’s debut. As of now, Leroy’s feels expensive.

A $25 pork chop, wrapped in prosciutto and crispy from the effects of a hot sauté pan, looked amazing. The huge chop lay atop a pile of “magenta” potato salad, which proved bland, and a few pieces of buttered corn. Peach gastrique is a smart sauce for pork, so there were no complaints there.

The rest of the menu included a lamb ragu with fettuccine ($20), roast chicken ($19), steak frites ($26), and scallops with a pea puree ($28). That list lacks a sense of adventure, no doubt. At the same time, better execution of more restrained cooking makes the new menu superior to the old. It’s hard to declare Leroy’s worth a special trip across the bridge, but the restaurant could be dinner plans for anybody who already has a reason to be in Coronado for the evening. It’s much less likely to leave diners confused and dissatisfied, but also unlikely to blow anyone’s mind.