Home grown success story David Spatafore opened his first place, MooTime Creamery in Coronado, in 1998. Since then, he’s gone on to launch Village Pizzeria in two locations, the now defunct Beach-N-Diner, Lil’ Piggy’s, a second MooTime in the Hotel del Coronado, and Coronado Coffee Cart at The Landing. All are operated under the NadoLife, Inc. restaurant group. 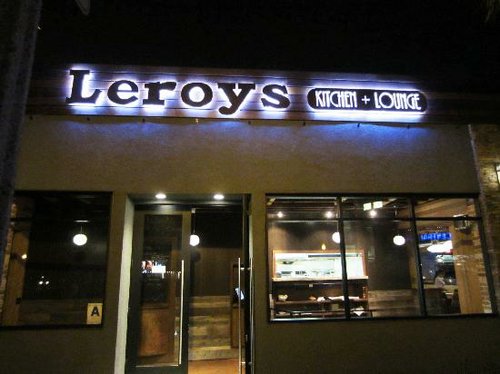 Beach-N-Diner, despite an enviable location on Orange Avenue, wasn’t taking Spatafore in the direction he wanted, so he made the decision in early 2011 to close it and reopen as Leroy’s Kitchen and Lounge, moving from the diner concept to a more upscale, farm to table venue. The construction, after unexpected delays and construction issues, took over six months, and Leroy's finally opened just about a year ago. 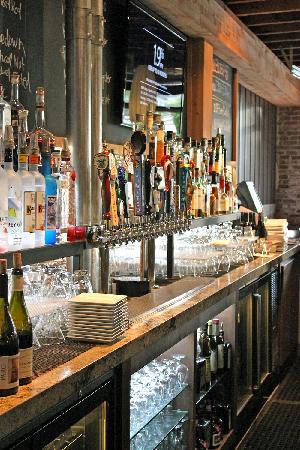 Executive Chef Gregory Chavez, who’s previous experience included serving as sous chef for 1500 Ocean at the Del, the Lodge at Torrey Pines, and the Fishery, makes use of local ingredients on the menu, which changes seasonally.

There’s lots of exposed wood beams and brick, sunshine streams in the large front windows, perfect for people watching. It’s family friendly, but not accommodating for groups larger than eight. (There is a private room that can hold up to twelve.)

On this gorgeous Sunday afternoon, we stopped in during Social Hour to take advantage of the discounts on food and drinks. 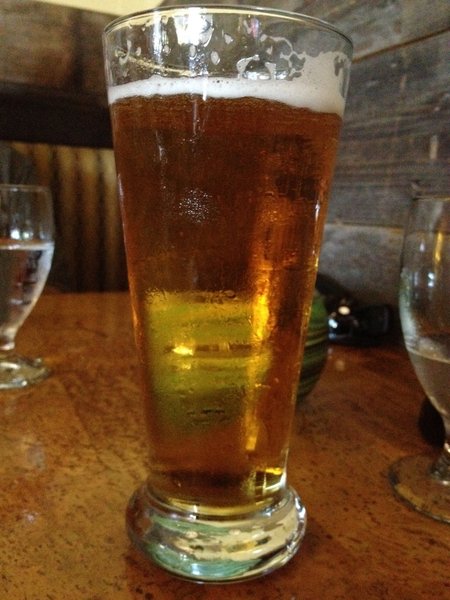 The cocktail menu looked interesting, lots of classic drinks as well as new twists on old friends. The Basil Gimlet, using Nolet’s Gin, or the Caipirinha de Laranja with Leblan Cachaca, tempted me. In the end, I chose Ballast Point’s Brother Levonian Saison ($4 at HH), a crisp, refreshing ale with citrusy overtones and honeyed maltiness. Perfect for a warm summer afternoon.

John chose three items from the Bites + Shares menu in lieu of an entrée. Blistered Padron Peppers ($5) were glistening, bright green and nicely charred. Smoky, with a slowly building burn, they were great with the sweet maltiness of the beers. On the side was a cup of chorizo cream cheese, tasty but odd, it was too thick and chunky to dip. 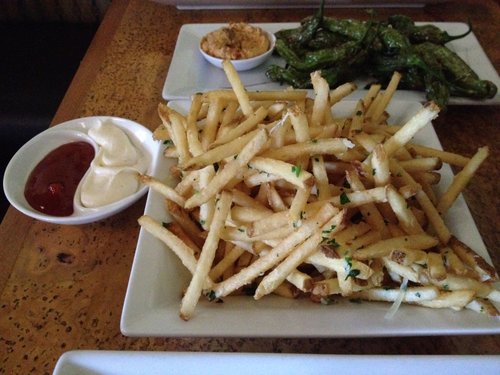 Truffle fries ($6) have been done to death, and unfortunately they’re often done poorly. Hot, salty and crispy, they have just a hint of truffle oil. It’s a good sized portion, and lucky for me, perfect for sharing. Creamy, garlicky aioli and tangy pomegranate ketchup provided sweet and savory touches. 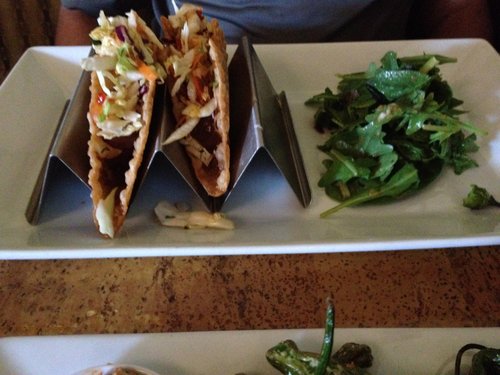 The Poke Tacos ($10) were a fun take on an old standard. Cubes of red ahi are nestled into shells of fried wonton skins, then topped with a tangy Napa slaw and a spicy creamy sauce. A delicious combination of soft and crunchy, creamy and tangy, spicy and sweet. 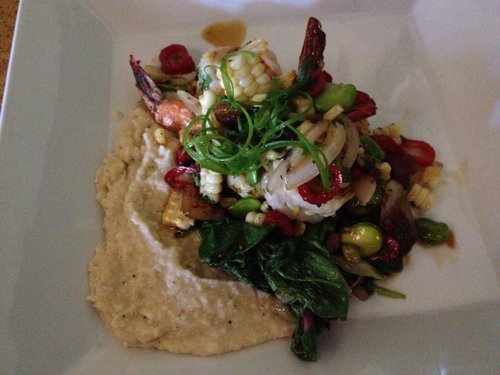 I decided on the Bacon Pepper Prawns ($21), six fresh, jumbo Gulf shrimp, grilled and nestled into a bed of grits. Sandwiched in between were lightly sautéed baby spinach, fava beans, hunks of crisp bacon pieces and fresh corn, grilled and sliced in slabs off the cob. A spicy-sweet and tart hot red pepper sauce was lightly drizzled throughout. A couple of the shrimp could have been taken off the grill a bit sooner, but overall it was a success, big, bold flavors and textures well balanced by the soft, creamy grits.

I super like Taco but the taco here in my place is cheaper than there in Leroy’s Kitchen and Lounge. But i think the place was cool and i want to visit there soon.