While diced potatoes are far from heresy, the orthodox approach to the California burrito requires, nay, demands french fries. Where potato chunks are sensible, fries are "crazy," the impulsive gesture of some stoned surfer or impulsive cook who thought outside the tortilla for a moment and changed burrito cookery as we know it. Fries inside a burrito might be the highest point of excellence in California cuisine. The burrito can be called the edible symbol of the border, the thing which represents Mexico to many Americans and America to so many Mexicans, which neither side can claim as its own. Our very own California burrito, with its french fries and carne asada in synergistic happiness, is perhaps the burrito's highest form.

I have eaten California burritos booth good and bad, but some of the best have come from Lucha Libre Taco shop in Mission Hills (1810 W. Washington Street, 619-296-8226). Lucha has had some serious issues with service and consistency in the years since it skyrocketed from obscurity to hipster popularity. Ignoring for a moment the wrestling theme and the quirky service model, there's no denying that the long lines of customers often overwhelm the staff and the food takes a nosedive in quality. Still, during off hours the Tijuego taco shop of record--with TJ dogs, corn, and fried cheese tacos--wraps one of the best California burritos.

The presentation is somewhat austere, as the burrito contains carne asada, fries, cheese, and sour cream. Nothing else is needed, since Lucha Libre Taco shop has an excellent salsa bar with 8 different sauces. The cilantro cream and the deep red chili arbol are both standouts, although the mango salsa is fun for chips. 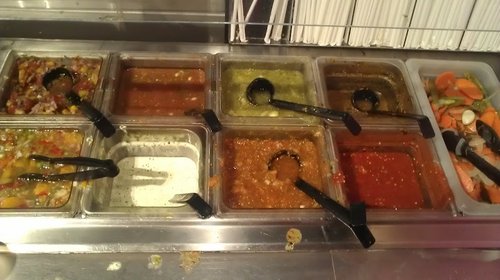 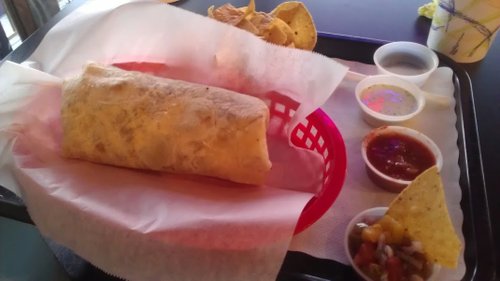 Such a simple preparation highlights the interplay of carne and fries with elegance. Quality of carne is important, and Lucha Libre meets the requirements by stuffing the burrito with generous amounts of deeply charred steak.

But it's the fries that really bring it home. They do it in a way that regular potatoes just can't manage. How can this be? After all, aren't fries just potatoes, cut into strips and fried? I think the answer is in the kind of fries that are used. Taco shops tend towards prepared french fries cut to a medium thickness. When viewed outside the confines of a burrito, it's plain that the fries are exceptionally crispy, more so than regular fried potatoes have a right to be. This is because a lot of commercially available french fries are coated in a thin batter. It's nothing like the batter that surrounds fried fish. It's the thinnest of veneers, applied before freezing, that gives the fries a crunch coating when they're cooked.

And it tastes great. That coating on the fries is a contributing factor to the flavor of french fries, something that's encoded in our collective memory as a good and wonderful thing, and it's detectable in a good California burrito. Every bite has a little bit of that "hot, fresh fries" taste in it, which, balanced by the grilled steak, is so perfect.

Of course, when it doesn't work out that way the effect of soggy, underwhelming fries is much worse than diced potatoes. There is some risk involved in using fries over potatoes, but when it pays off the reward is that much greater. For this reason alone, I have to adjudicate in favor of french fries for the California burrito. When they're good, they can't be beat.