There's no denying that the California burrito is a treasured San Diego original, a staple cuisine of America's Finest City. It characterizes San Diego with its easy-to-eat appeal to slacking surfers and harmonious fusion of Mexican and American sensibilities into a dish that's greater than the sum of its parts. Like the Primanti sandwich that's synonymous with Pittsburgh, or New England clam chowder, or even that chocolate-flavored chili they eat in Cincinnati, the California burrito is San Diego perfectly wrapped in a grilled tortilla.

There's no strict consensus about what it must contain, although the basic guidelines call for carne asada, cheese, guacamole, sour cream, salsa, and french fries...or maybe potatoes? It's that last decision that seems to split California burritos into two camps. Fries vs. diced potatoes. Sure, some shops like to offer the California with chicken or pork instead of carne asada, and some try to throw shrimp into the mix for the "surf and turf" effect, but I think that the choice of potatoes over fries actually makes a bigger difference. Putting french fries inside a sandwich makes a strong statement. Look at the Primanti sandwich; that restaurant has built a reputation on it. But choosing diced potatoes in the California burrito is an underdog move that's not wholly unwarranted.

Take Ray's, for one. 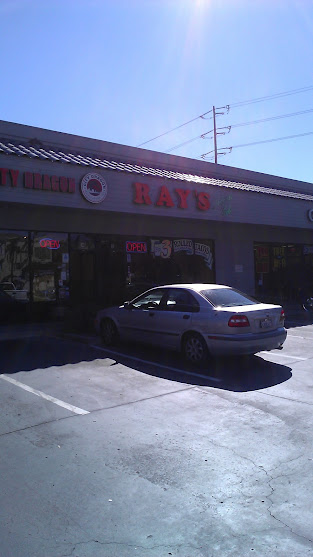 Ray's is a very average taco shop. It's in an average location, serves average food, and charges average prices. The one thing that bears special mention at Ray's is the salsa. Their salsa verde is closer to an Argentine chimmichurri or an Italian salsa verde (minus the anchovies) than it is to the jalapeno/cilantro/tomatillo concoction that's typical of most places. The red salsa is of equal novelty, so dark that it's almost brown and with a deep, toasty flavor. The salsa at Ray's is better than the food, without a doubt, although the place does have a reputation for consistency that's worth something.

And Ray's put's potatoes in the California burrito. Salsa fresca, guac, and sour cream are in there too. I received a monster of a burrito, stuffed to the brink of explosion and promising (if I had to hazard a guess) at least 900 calories beneath its finely griddled exterior. It was a perfect representative of the potatoes-over-fries technique that I've tried many times at many taco shops. 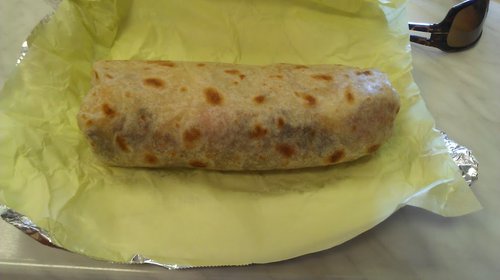 The only problem with the potatoes inside the California burrito was that the made me think "breakfast" too strongly. I had visions of home fries with every bite. I can see that the potatoes can be used more consistently than fries, since they hold better and already have to be prepped for the breakfast burrito, but they lack a certain X-factor that makes the California burrito so perfect, and I think it's the absent, subtle taste of fried potato sticks. I didn't get the feeling of satisfaction that eating a sandwich stuffed with fries gives me. I didn't get, "oh, man this would be so perfect if I was drunken!" or "I'm so hungry I want a sandwich that's like an entire meal at In n Out in one!"

I think those qualities count for a lot. It's not strictly a matter of how "good" the burrito tastes, because California burritos with potatoes are perfectly delicious; the question is one of how right it tastes, i.e. which parts of the mind are stimulated in the eating, philosophically, if you will.