The tour continues into North Park for "homestyle" sandwiches

Planted firmly across the street from Lefty’s North Park, Eddie’s Place seems to have taken a class on interior decoration from the pizza place. Rocky posters, Phillies MLB pendants, pictures of the Liberty Bell, and other Philly-centric tchotchkes festoon the walls. Eddie’s has a strong aura of East Coastness hanging around, which I couldn’t figure out at first. Then it hit me as I was browsing the website. The restaurant is built in a re-purposed house and retains much of that “homey” look. Putting restaurants in houses is much more common in older, more land-choked parts of the US than it is in young, spacious San Diego. On a nice day, Eddie's patio would be ideal for grinding steak bombs in the sunshine! 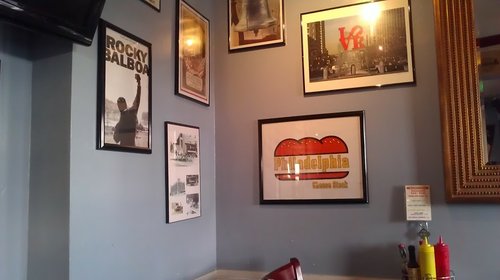 Service was friendly and the place was nice and clean. I even admired the commodious bathroom. I gather that, though Eddie’s lacks glitz, it’s well cared for and that the employees take pride in their place. It’s odd that such a thing is so rare, across the spectrum of restaurants, but it’s always good to see when it occurs.

Cheesesteaks are served in one size only at Eddie’s, the nominally 9” Amoroso roll. This bread is somewhat ubiquitous amongst the Philly-style restaurants who consider it an essential part of the taste. The chewy rolls do have a certain texture that’s emblematic of steak (and other) sandwiches. I ordered my steak with the works (mushrooms, peppers, onions, and salami) and American cheese for $9.99. Steaks with a few less ingredients can be cheaper, but I don’t roll like that. 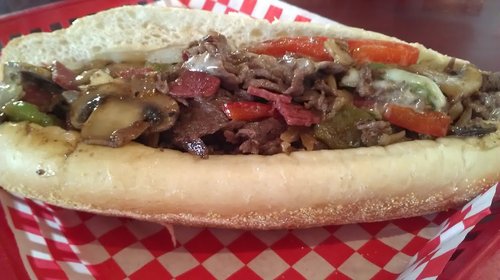 From the start, I’ll say that the sandwich was more girthsome than anything I’ve found as of yet. In my perfect sandwich, the bread barely contains the heaping pile of steaming cheesesteak. It practically bursts at the seams from the sheer magnitude of shaved ribeye that’s been crammed into a durable, chewy sub roll. Eddie’s wasn’t there, but it was close. As I ate the sandwich, bits of steak kept falling out from being mildly-overstuffed. And the steak was very good, nearly identical to Gaglione Brothers in taste and texture, but with a greater preponderance of vegetables in the mixture.

I’ll admit, I missed the peppery glory of the Gaglione’s condiment bar. Whither the cherry peppers and hot relish? I was left with nothing but Tapatio and Worcestershire sauce to augment my cheesesteak, neither of which carries the acrid punch and crunch of a mouthful of pickled hot peppers.

As with Gaglione’s, Eddie's has beer to drink and side orders. I passed on fries due to lack of stomach capacity, but anyone so inclined could add hot wings, onion rings, french fries, or soft pretzels to his cheesesteak and make the experience truly gluttonous. There are other kinds of sandwich available, more than I can recount here, but I was most intrigued by the monstrous hamburgers I saw come out of the kitchen. They held a lot of promise for hungry people, but, really, why not just get a cheesesteak?

Been to Eddie's a few times. I'm not impressed. I used to like Lemon Grove Deli's cheesesteak but I think they changed owners or the cook. Wasn't great last time I tried one. I like McGonagle's in National City.