Hottt! On the Wing: I Take Up South Park Abbey’s Challenge

So if you were looking in Feast! about – Lordy! – six weeks ago, me, Ian Pike, and offdutyfoodie were all talking tough about taking on the Tough Guy hot wings at South Park Abbey, the bar-eatery at 1946 Fern Street, South Park (619-696-0096). 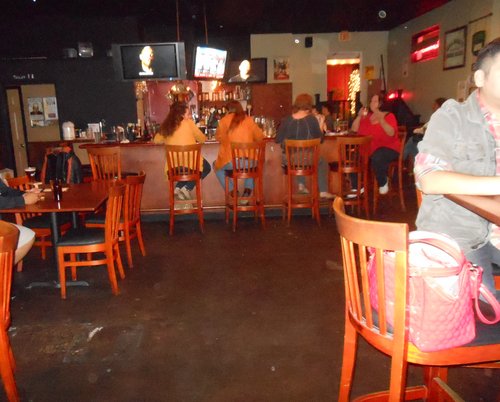 Adam Neitzke, the guy who runs South Park Abbey, had warned me: “Don’t.”

So ’t’other night I’m walking up around that dog-leg where Fern and 30th fight for naming rights, and there it is. The Abbey. What’s more, smoke’s coming from an outside smoker.

What thu heck. I’ll just do a rekky. See what the fuss is about.

“I wouldn’t,” says this lady from the corner stool at the bar. Darlene. 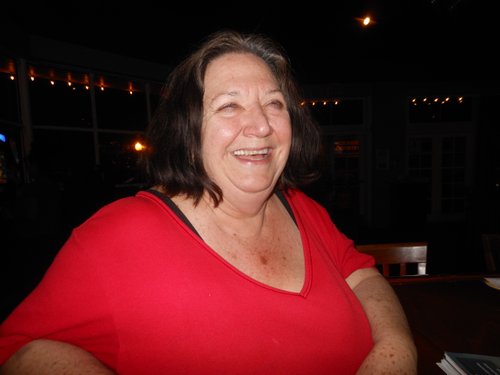 “We all call her mom,” says Sharon. Sharon’s munching an Angus beef cheese burger with crunchy onions added ($9.50. Plus $5 for sweet potato fries – not cheap, but pretty nice. She lets me take a few). “And mom’s right. It’s just suffering. Honestly, people burn.” 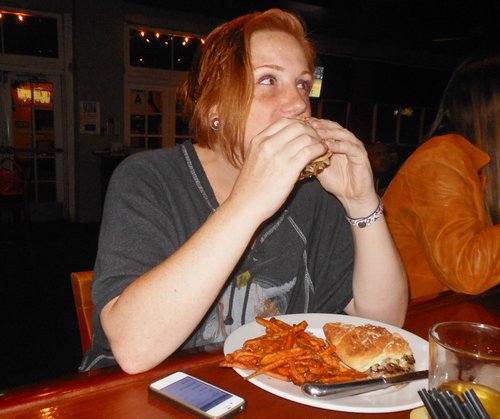 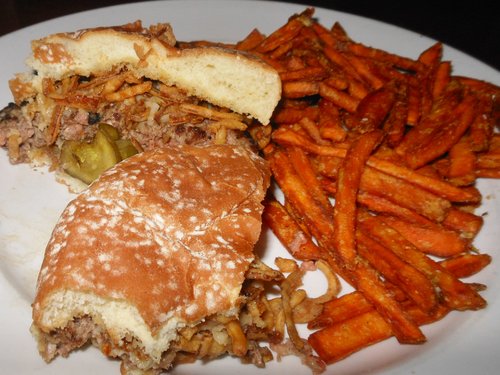 Turns out Darlene is the mom of Adam Neitzke. They run South Park Abbey in partnership. And yes, they have built an awesome reputation for their wings. Slow-smoked, then quick-fried to give them a crispy edge just before they serve them. Not cheap. Nine bucks. But they give 3 percent of all takings to charity.

Flavors? The buffalo, the dirty, and specially the honey habanero are almost at cult status around here.

And then there’s the Tough Guy. Off the heat scale. And you have to sign a release to say you won’t sue them before they’ll sell them to you.

“Guys do it to impress their dates,” says mom. “Then you get tears. Cries for water…”

“Not a good idea,” says Amalea, the barkeep.

“The only person I’ve seen handle these is a woman,” says mom. “She comes and has them maybe once a month. Not a problem. Don’t know how she does it.”

Amalea hands me a printed sheet of paper. It’s the release form, a long printed screed about how The Abbey won’t be held responsible and the customer’s going into this knowingly and is of sound mind and body.

“This product can reach 100-1,000 times hotter than a jalapeño pepper…I am not inebriated…”

I sign. At the bottom of a pager with a couple dozen names above.

Amalea brings the plate of wings, lickety-split. They look innocent enough, even though a kind of angry dark red pile of gunk glowers at me from the top of the pile.

I see mom and Sharon look away.

I lift the nearest one, the one with the least amount of gunk on top, almost gag at the fumes, take a bite and… 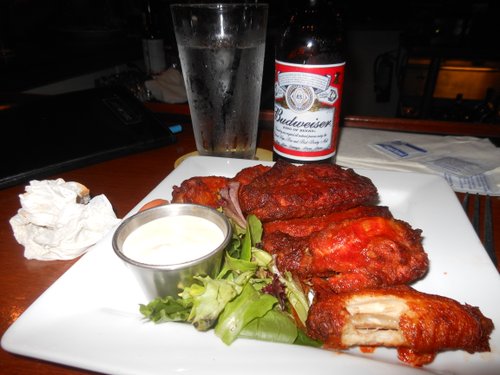 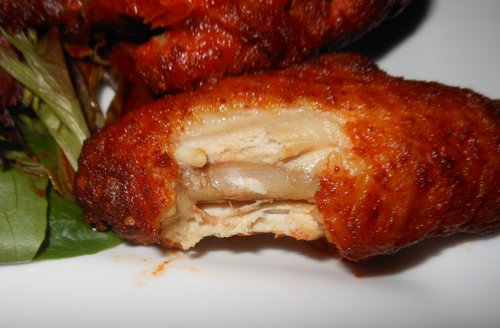 My God! I’m in the middle of a heat typhoon. Taste nothing. Gills, tongue, throat taking hammer blows. I feel like “The Scream,” that painting by Edvard Munch that just sold for $120 million. Nostrils feel like a bull's nostrils in a dust storm.

Mom looks, unmoved, as the sweat sprouts from the back of my neck, and tears sprout from my eyes.

“Don’t touch your eyes with those fingers,” she says.

Suddenly I have to go. I head for the facilities…

…Two minutes later, I’m limping back, bent over like a lobster in hot water.

“Oh dear,” says mom. “And I should have told you to wash your hands before you tinkle…”

So guys: I’d say any of you can beat one bite. On the other hand, I have one word of advice.

Tough Guy? Be a wimp and live. 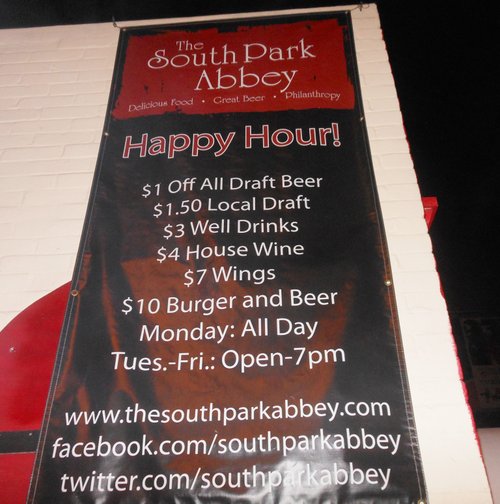 Thanks, IP, but I did only make it to one bite b4 I was blowing like Puff the Magic Dragon...