Swiener: Fondue on a Stick?

The red tent draws me across the Petco Park parking lot.

Then the smell of sausages cooking hauls my schnozzle even closer.

Bunch of people cluster around it, right outside the old (1894) Wonderbread building, the one that Mission Brewery has made its own (at 1441 L Street, near 12th and Imperial Transit Center, East Village). 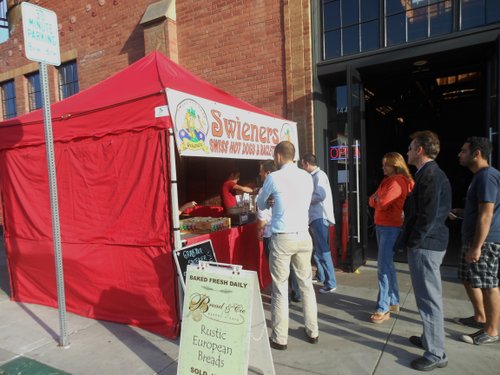 First thing I notice isn’t sausages, though. It’s a big round wheel - of cheese. And I mean big, one, two feet across. It has been cut in half, with one half wheel facing upwards in a kind of black metal frame. 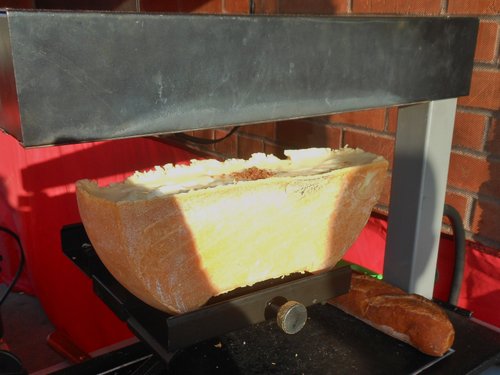 And – what’s this? The exposed top surface of the cheese seems to be bubbling. Like it’s being heated…I cock my head and look up. Wow. It is. A long thin heater’s radiating down on the exposed surface. 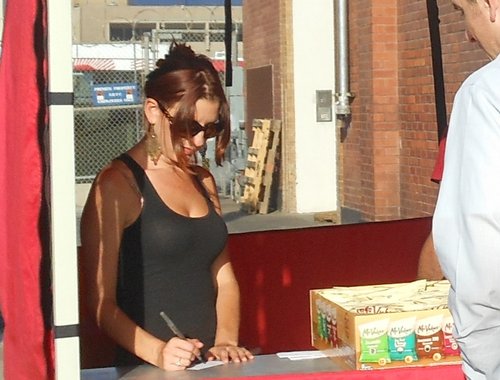 “We take an organic sausage like this German brat, heat up a stretch of baguette on those heating prongs, stick the wiener in, and then scrape off the melted top part of this Raclette cheese from Switzerland. My husband Nico is Swiss. He created this. Try one! It’s hot and tasty all through. You’ll see.”

And wow, we’re talking fondue on a stick, almost.

Basic dawg is $7. You can have the German brat, spicy pork, all-beef, chicken apple, or vegan sausage. Add ketchup, mustard or Dijon, or a Swiss onion sauce with caramelized onions (“a Swiss family Caniglia recipe”).

Then for two more bucks, you can add a scraping of the melted top of the “Swiss Mountain Raclette cheese," and add paprika, chili flakes, jalapeños, or bacon bits.

And the thing is they get a chunk of Bread and Cie baguette, and thrust it down on the hot pylons of this machine that also keeps sausages hot. 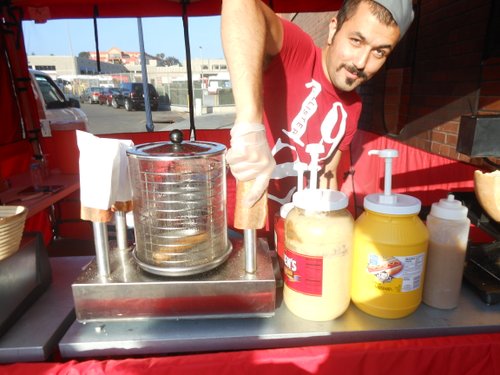 So by the time my brat’s done, the baguette is hot, inside and out. She slides the sausage in the hole, then scrapes oozings from the Raclette cheese wheel, and adds fixin’s. 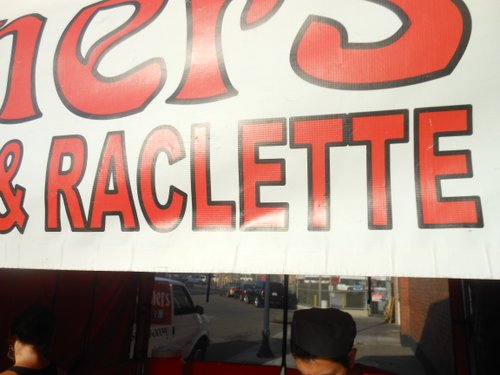 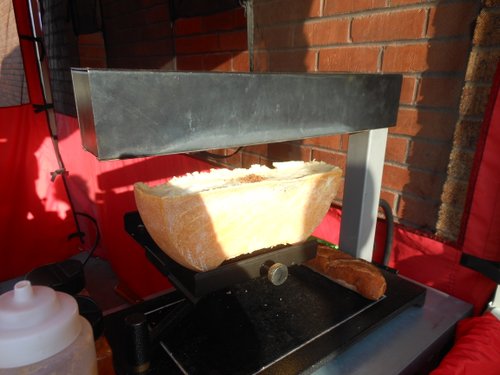 My problem: Have to catch a bus in two minutes. From 12th and Imp. Amanda wraps my dogwich in foil and I run like the wind.

It’s only when I’m standing – winded – as the bus pulls up that I have a moment, ’cause I’m at the back of a line. 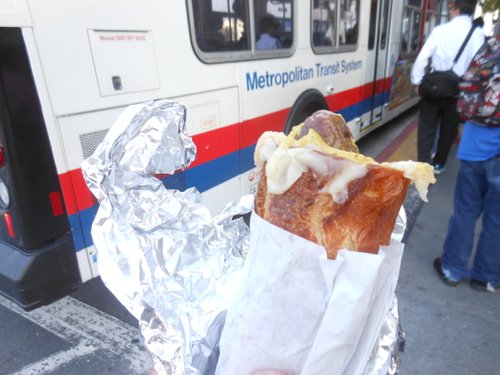 ...and chomp a big bite from the top. 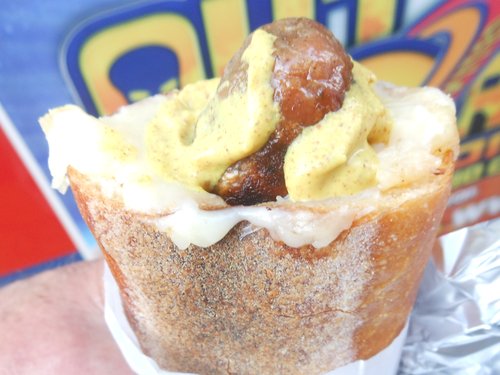 ’Course then I have to sit the whole bus trip through, waiting to take the next bite.

Carla, ye great judge of hot dogs, gets the second half, natch. Her finding: “You know what, Mr. B? This is the best since that last dawg you brought back. The one from the TJ place, remember?”

Oh yes. Sótano Suizo. That place was Swiss too.

Hey. Gotta wonder. This a Swiss conspiracy to take over the wiener world?