I’m desperate to get down to 200 pounds.

I did go on a fast once. For a week. OJ, once a day. That was it. First two days, hollow-gut hell. Rest of the week, not so bad. Just mind games, habits to fight. Lost maybe ten pounds. Didn’t last.

But people make big money from food fads. And they’ve been going on awhile. Got started on this from a poster created by Sodexo, a food catering company. It spells out the fads that have come and gone since the 1920s. 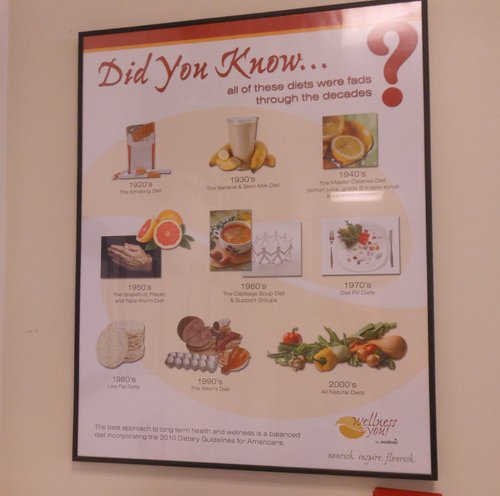 But some started even earlier.

1910s: Mega-Bite diet. “The Great Masticator,” a San Francisco art dealer named Horace Fletcher, said we should imitate cows in the way they chew their cud. The golden rule: chew each mouthful 32 times, equal to the number of teeth in your mouth, and spit out anything that hasn’t turned into gruel by then. He said he took 65 pounds off his 217 pounds frame doing this.

1920s: The Smoking Diet. Back to Mayan times, smoking was known to suppress appetite. In the '20s, big stirrings for women’s rights was jumped on by the cigarette industry to claim you could be cool and slim, if only you’d “reach for a Lucky instead of a sweet.”

1950s: Grapefruit, prayer, and tapeworm diet. (Yes, real tapeworms. They make you feel hungry all the time but do all the eating for you. Maria Callas the opera diva was rumored to use it.) Issue: how to get rid of it when you’re done. 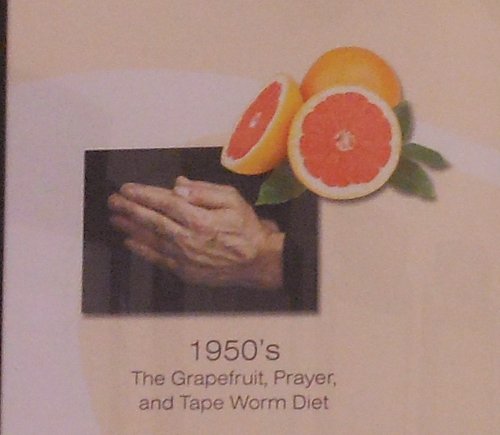 There are plenty more, including the Atkins Diet of the 1990s. Just eat meat, right? The Adam and Eve diet: Just eat fruit. The Sleeping Beauty diet: Just sedate yourself for a week. You sleep through and wake up thin. And even Breatharians, who live just on sunlight…

Need I say: don’t try some of these at home. They sound positively lethal.

Any other ideas? Like, ideas that work without paying some doctor your life savings?

Maybe I should write a how-to book on it, one diet at a time.