“It’s 900 degrees outside and we’re next to a flaming hot grill,” John was laughing as we sat down. We were in Jeong Won BBQ, on Convoy Street between Engineer Road and Opportunity Road. Thanks to decent ventilation and strategically placed fans, it was pretty warm inside but not unbearably stuffy.

Jeong Won serves all you can eat Korean barbeque, that is to say, they prepare everything you need to grill your own Korean barbeque. Each table has its own blistering hot grill in the center. Along the back of the room, a variety of nice looking meat, poultry, seafood and vegetables are on a refrigerated buffet, waiting for you to load up on a plate and toss, hissing gloriously, on your grill. 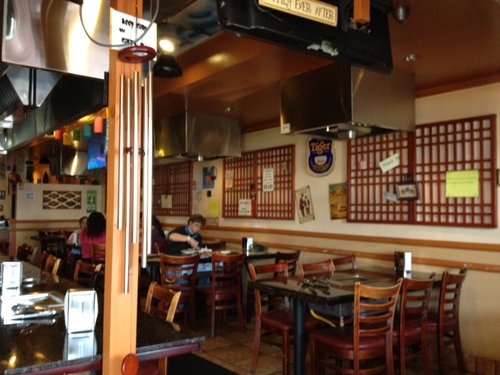 Beef, pork, lamb, and chicken are thinly sliced, along with some offal offerings, tripe, liver, and chicken hearts ; some are tossed with marinades or spices. Seafood and amphibious choices that day included frog legs, basa fish, scallops, green-lipped mussels, shrimp, squid and octopus. 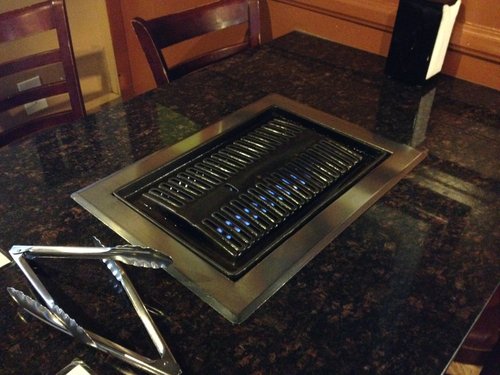 Another case holds a large assortment of pickles, kimchi, salads, sprouts, condiments and sauces. A soft serve machine completes the picture. I can never pass up soft serve, but that’s another issue. 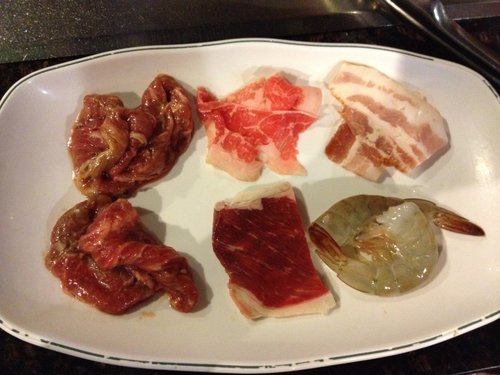 Since the cooking is up to you, it’s wise to get your dipping sauces and condiments before you start to cook any of the protein. With thicker, denser items, such as long slabs of sliced sweet potato or fat mushrooms, you’ve got a few minutes of cooking time, but the thinly sliced beef and pork cooks in a flash. It needs your undivided attention or you’ll be pulling smoking, blackened honey pork off the grill. Much to your tablemate’s amusement. 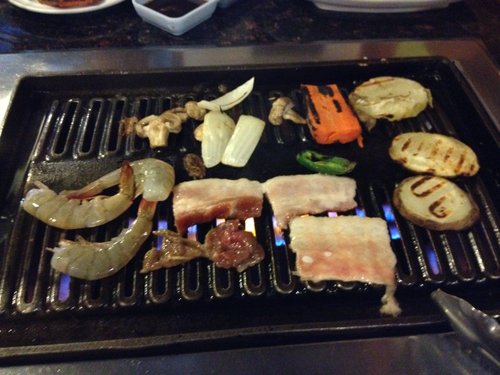 My favorite items were the short ribs, lamb, brisket, and both versions of honey pork, smoked and non. I meant to ask John for a taste of his frog leg, but it was gone before I even noticed it was off the grill. He also loved the squid and octopus. The meal comes with serviceable miso soup and not great rice. 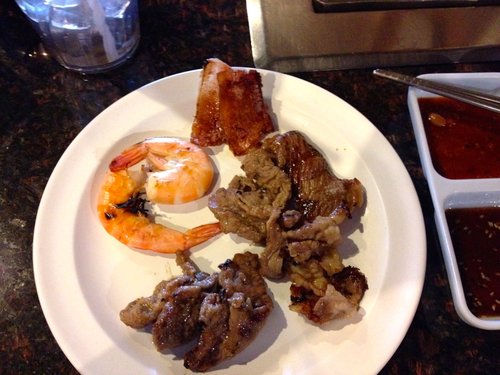 At $20 per person ($17 before 4 pm), Jeong Won is reasonably priced. A variety of canned or bottled beverages are available.

Jeong Won is located at 4690 Convoy St in Kearney Mesa.