It's been open for all of four days now, but the Big Front Door is already showing a lot of promise. To begin with, the physical transformation of the space is astonishing. The defunct Greco-European deli that used to be in the building was downright uninviting, but the new look is stellar. The eponymous big, front door is a huge sheet of glass that's hinged in the center to swing open and let in the summer sun that's rising earlier and earlier every morning now. Inside, everything is blonde wood, glass, and shiny stainless. Fisher-Price chic chairs line a long, low table and the kitchen is walled off by glass along the back.

University Heights needs a store like this, if only to take the pressure off of Sprouts. I've mentioned my affection for the Royal Food Mart in Hillcrest, and the Big Front Door looks like it is going to grow into something similar. It's a combination deli and specialty foods store, but with a sharper focus than the all-purpose Royal. Currently, there's Sadie Rose bread, craft beer, some interesting bottles of wine, and a slew of specialty sodas for sale. I will be interested to see how the BFD builds up its wine collection, as the bottles tended to be on the slightly costlier side, i.e. not a bunch of Barefoot Bubbly or Charles Shaw. Not that good enough wine can't be had for under a ten spot, but there's something to be said for setting the bottom line just a little higher inasmuch as it nudges people in the right direction. 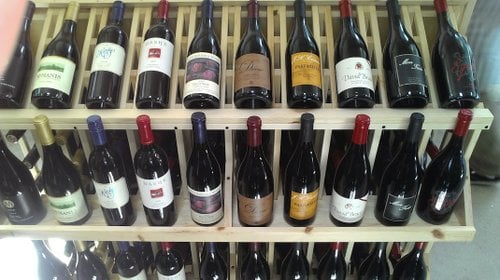 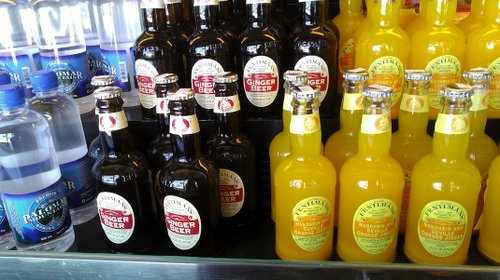 The deli is a sandwich and salad affair, though more expansive options are perhaps yet to come. I tried a "grapevine" salad for $10. The man in charge, a former GM at the Kensington Grill, described it as "everything that grows along the Grapevine Highway in the San Joaquin valley." The salad was sweetened by grapes and sliced dates, while almonds, pistachios, and avocado lent body to the entire affair. An orange vinaigrette was strongly flavored enough that I only had to use half of what was given me. 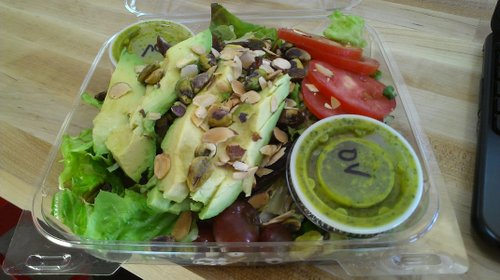 In time, perhaps I will try a shredded duck salad ($11.50) with cranberries and Stilton cheese, or the "loins of fire" sandwich ($9.50) that's built around a chili roast pork loin. Also interesting, a "sugar b" sandwich ($7.50) with orange, strawberry, cream cheese, and honey comes on a sugar-crusted brioche. Yow.

I am excited to see how the Big Front Door grows into its spot in the neighborhood and I would encourage people to check it out. The physical location isn't the greatest, in terms of business longevity, but it looks like this is going to be a valuable asset to the stretch of Park just south of that big, gnarly intersection with El Cajon and I have high hopes for this ambitious project.